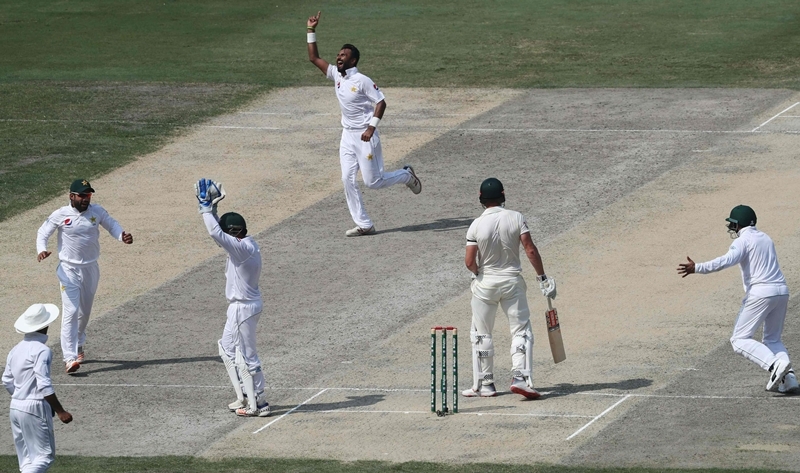 Duba: Debutant Pakistan off-spinner Bilal Asif led an Australian collapse with four wickets on the third day of the first Test in Dubai on Tuesday. The 33-year-old took his wickets off 22 balls as Australia slumped from a solid opening stand of 142-0 to be struggling on 180-5 at tea on a Dubai stadium pitch which has started to take a sharp turn.

At the break, Mitchell Marsh was ten not out and skipper Tim Paine on six, as Australia are still 302 runs behind Pakistan’s first innings total of 482 and need another 103 runs to avoid the follow-on.

It was a total contrast from the pre-lunch session when Australia — resuming at 30-0 – reached 137 without loss with both Usman Khawaja and debutant Aaron Finch defying Pakistani spinners during their resistance-packed stand. But the second session belonged to Asif, who dismissed Usman Khawaja (85), Shaun Marsh (seven), Travis Head (nought) and Marnus Labuschagne (nought) in the space of 29 runs. Asif has figures of 4-28 in 17 overs.

Pakistan, though, were put on track by seamer Mohammad Abbas who forced Finch to drive straight into the hands of Asad Shafiq at short mid-on after scoring 62. Khawaja hit eight fours before miscuing a premeditated sweep and was caught at short leg while Finch had five boundaries and a six in his knock.

Leg-spinner Yasir Shah was unlucky not to be amongst wickets, having dropped Mitchell Marsh off his own bowling for two and wicketkeeper Sarfraz Ahmed missing a stump in the first session with Khawaja on 17.

Earlier in the day, Finch was more confident as he punched two boundaries and a six off Yasir before sweeping Asif for a boundary to reach his half-century. Khawaja, the Pakistan-born batsman, improved upon his previous best score in Asia of 26, made against Sri Lanka at Galle in 2011, by reaching his 13th Test half-century.