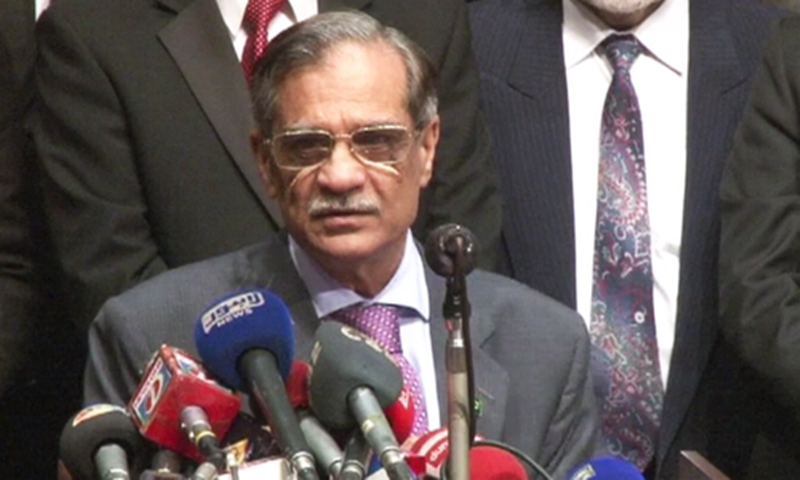 Islamabad: Pakistan’s top judge Saqib Nisar today apologised for his ‘sexist’ recent remark in which he had compared the length of a good speech to a woman’s skirt.

The chief justice, during a speech in Karachi, quoted former British prime minister Winston Churchill as saying that “a good speech should be like a woman’s skirt; long enough to cover the subject and short enough to create interest”.

Nisar’s remark drew criticism on social media, as well as from the Women Lawyers’ Association (WLA) and the Women Action Forum (WAF).

During the hearing of a case on taxation, he said: “I am apologetic if I hurt anyone’s sentiments. That was not my intention. My ‘skirt’ remark was only referencing a quote by British politician Winston Churchill.”

Explaining that hurting anyone was not his intention, Nisar said “women comprise half our population”, adding that social media users were “trying to create an issue” out of his statement when there was none.

The WLA had called the remark by the chief justice “a setback for women lawyers who practice in a male-dominated profession”, adding that such statements cause “the alienation and marginalisation of women in the legal field”.

“Given the global conversation today about the impact of discrimination on women’s lives, ranging from casual sexism in the workplace to sexual assault, the statement is particularly tone-deaf, tasteless, and unbecoming of the chief justice of any country,” the WLA statement said.

WAF in its statement had criticised him, noting that the quote “reveals deep-rooted sexism and double standards women are held to which discourage women from joining the legal profession.”

“Statements that dehumanise and objectify women are not only derogatory and demeaning towards women but also contribute to the victim-blaming culture which is the biggest impediment in fighting crimes committed against women,” the WAF statement said.

The WLA had also asked the chief justice to choose his words more carefully, while the WAF called on the Chief Justice of Pakistan to issue a public apology.