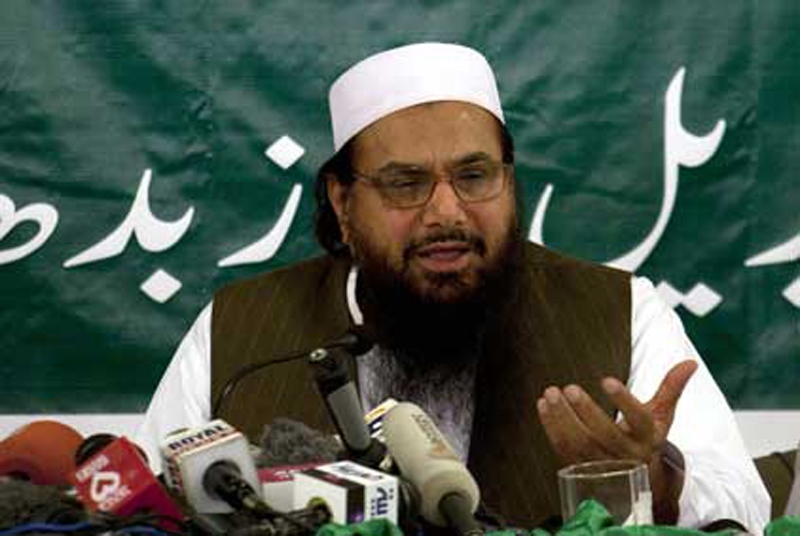 Hafiz Mohammad Saeed, center, chief of Jamaat-ud-Dawwa and founder of Lashkar-e-Taiba, addresses a news conference with anti-American cleric Sami ul Haq, left, and Liaquat Baluch in Rawalpindi, Pakistan on Wednesday, April 4, 2012. Saeed, one of Pakistan's most notorious extremists mocked the United States during a defiant media conference close to the country's military headquarters, a day after the U.S. slapped a $10 million bounty on him. Banner in background reads "Professor Hafiz Mohammad Saeed." (AP Photo/B.K. Bangash) |

Islamabad : Pakistan’s interior ministry has asked the country’s elections overseeing body to ban from politics a new party backed by Islamist Hafiz Saeed, who carries a USD 10 million US bounty on his head for alleged involvement in 2008 terror attacks in India.

Haroon Shinwari, a spokesman at the Election Commission of Pakistan, said on Friday that they will assess the status of Milli Muslim League party next month.

The MML party is headed by Saifullah Khalid, a friend of Saeed, who is the founder of the Lashkar-e-Taiba militant group.

India accuses Saeed of links to the 2008 Mumbai terror attacks that killed 160 people, and he has been designated a terrorist by the US government. Saeed is currently under house arrest in Pakistan’s eastern city of Lahore.