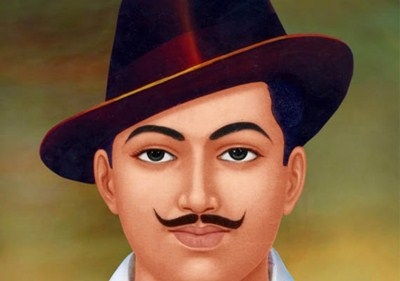 Lahore : Eighty-seven years after Bhagat Singh was hanged for the murder of a British police officer, Pakistan on Monday for the first time displayed some records of the legendary freedom fighter’s case file, including his execution certificate.

Singh, 23, was hanged by British rulers on March 23, 1931 in Lahore, after being tried under charges for hatching a conspiracy against the colonial government. The case was filed against Singh, Sukhdev and Rajguru for allegedly killing British police officer John P Saunders.

The Punjab Archives Department could not display the whole record of the case file of Singh as it was not reportedly ‘fully prepared.’

“Today we exhibited some record of the case file of Bhagat Singh (at the tomb of Anarkali, Lahore). We will display more record, probably all files, related to this case tomorrow,” an official of the department told PTI.

Some other record related to manifesto of the Naujawan Bharat Sabha Lahore by B.C Vohra, several clippings of the daily VIRBHARAT and etc.

“We will display more clippings of newspapers and other archives related to Indian independence movement tomorrow,” the official said.

One document about the execution of death sentence of Bhagat Singh says: “I (superintendent of the jail) hereby certify that the sentence of death passed on Bhagat Singh has been duly executed and that the said Bhagat Singh was accordingly hanged by neck till he was dead at Lahore Jail on 9 pm Monday the 23rd day of March 1931.

The body was not taken down until life was ascertained by a medical officer to be extinct; and that no accident, error or other misadventure occurred.”

Revolutionary Singh significantly did not end each application with the customary ‘yours truly’ or ‘obediently’. Instead he chose the words “Yours etc. etc.” showing his resilience in the face of tyranny.