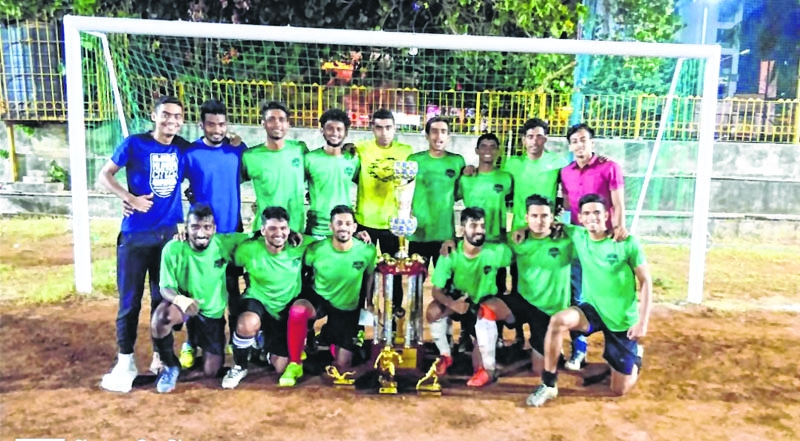 Mumbai : Goalkeeper Vikram Singh’s heroics under the bar saved the day for defending champions Our Lady of Egypt Parish, Kalina and helped them retain their men’s open crown in the Dhoot Developers sponsored 5th All-Mumbai Inter-Parish football tournament for the ‘Orlem Super Cup’, organised by the Our Lady of Lourdes Parish, Orlem.

Showing good reflexes and superb anticipation Vikram produced three timely saves in the crucial tie-breaker as Our Lady of Egypt successfully converted from their first three attempts taken by Tyson Pereira, Dan Dias and Bipin Rawat and went on to record a 3-0 win against Holy Cross Parish Kurla in the summit clash, played under floodlights at the Church grounds on Saturday night.

Both the Kalina Parish and Kurla Parish outfits were engaged in an absorbing tussle for supremacy. The fare dished out by the two was fast and exciting and there were quite a number of chances created at either, but the attackers were unable to cash in on the chances and the contested ended in a goalless stalemate. The referees decided to enforce the tie-breaker to settle the outcome.

In the penalty shootout duel, Our Lady of Egypt strikers showed better nerves and proved to be better marksmen while Holy Cross players saw their attempts saved by the rival goalkeeper Vikram who stood tall under the bar.

There was some consolation for Holy Cross as their key player Shailesh Jadhav was later adjudged as the ‘Player of the Tournament’.

Our Lady of Egypt picked up three awards with striker Tyson Pereira bagging the Golden Boot for the highest goal-scorer, Dan Dias won the ‘Player of the Final’ prize and goalkeeper Vikram Singh being named as the ‘Best goalkeeper’ of the tournament.

Player of the final: Dan Dias (OL of Egypt).