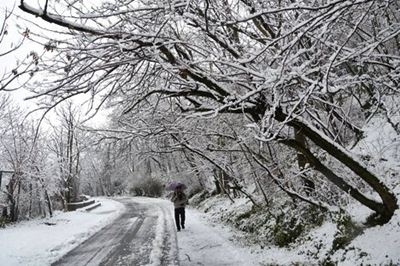 London: Dust from a sandstorm in the Sahara desert is causing snow in eastern Europe to turn orange, transforming the mountainous regions of Ukraine, Russia, Bulgaria and Romania into Mars-like landscapes, the media reported on Monday.

The unusual scenes were believed to be created by a mix of sand, dust and pollen particles stirred up and swept across from storms in northern Africa, the Guardian reported. According to meteorologists, the phenomenon occurs roughly every five years. Steven Keates, a weather forecaster at the UK’s Met Office, told the Independent:

“As the sand gets lifted to the upper levels of the atmosphere, it gets distributed elsewhere. “Looking at satellite imagery from NASA, it shows a lot of sand and dust in the atmosphere drifting across the Mediterranean.”

One person wrote “Martian landscape, Apocalypse Now.” It is not the first time eastern Europeans have experienced an eerie snow-tint, reports the Guardian. A similar phenomenon occurred in 2007 when mysterious “oily” orange snow fell across three regions of southern Siberia.