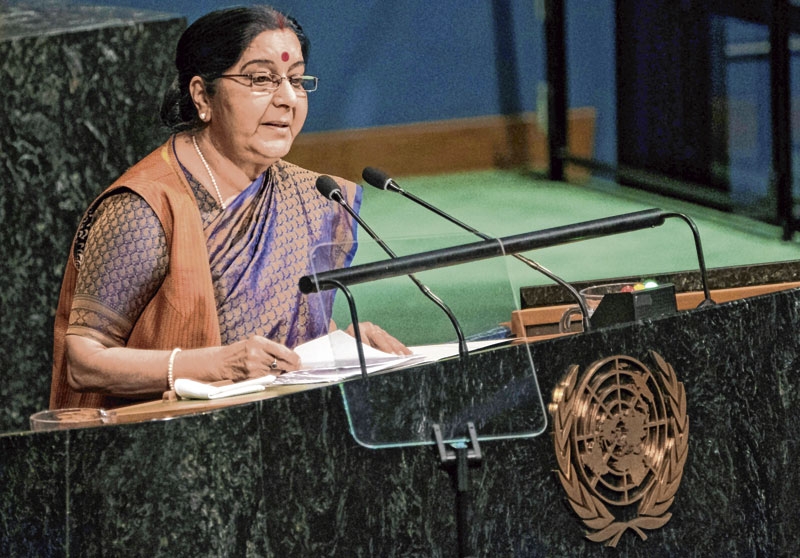 United Nations : External Affairs Minister Sushma Swaraj on Saturday said demonetisation was a “courageous” decision taken by Prime Minister Narendra Modi to challenge the black money – one of the by-products of corruption, reports PTI. Prime Minister Modi on November 8, 2016, demonetised Rs 500 and Rs 1,000 notes in a bid to clamp down on black money, fake currency menace, terror funding and corruption.

“Demonetisation was a courageous decision to challenge one of the by-products of corruption, the ‘black money’ that disappeared from circulation,” Swaraj said in her address to the 72nd session of the United Nations General Assembly here.

She also said India has passed the Goods and Services Tax (GST) legislation, through which there is one-tax across the country, without the untidy and punishing system of multiple taxes under differing categories in different parts of India.

“Our ‘Save the girl, Educate the girl’ campaign is reducing gender inequality. The Clean India programme is generating what can only be described as a revolutionary change in social attitudes and habits,” she said.

India, she said, has displayed the courage and leadership to take tough decisions which have launched the interlinked process of sustainable development.

Swaraj said the complete eradication of poverty is the most important priority of the present government.

“There are two ways of addressing the curse of poverty. The traditional method is through incremental levels of aid and hand-holding,” she noted.

“But our Prime Minister Narendra Modi has chosen the more radical route, through economic empowerment. The poor are not helpless; we have merely denied them opportunity. We are eliminating poverty by investing in the poor. We are turning them from job-seekers into job-providers,” Swaraj said.

She said that all of the economic programmes – Jan Dhan, Mudra, Ujjwala, Skill India, Digital India, Clean India, Start-Up India and Stand-Up India – have a principal purpose, the empowerment of the poor.

“The Jan Dhan plan must surely count as the world’s largest financial inclusion scheme,” she said, adding that at least 300 million Indians who had never crossed the doors of a bank on Saturday have bank accounts: this is equivalent to the population of the United States of America. “This was, understandably, not easy to complete in three years, but our banks, achieved this visionary goal set by our Prime Minister. While some remain to be included, the target has been set – every Indian family will have a bank account,” she said, adding that these accounts were opened with zero balance.

Mudra yojana, she said, has enabled government to fund the unfunded. “Those who had never dreamt that bank credit was within their options, today, through Mudra, are getting soft loans without collateral to begin micro businesses,” she said.

She said that over 70 per cent of these loans have gone to women.

Describing Ujjwala a signature scheme of the government, Swaraj said free gas cylinders are being provided to the poor so that women do not have to suffer the dangerous consequences of wood-fired kitchens.

She said India has started, this year, the India-UN Development Partnership Fund, asserting that the country is completely engaged in fighting poverty.