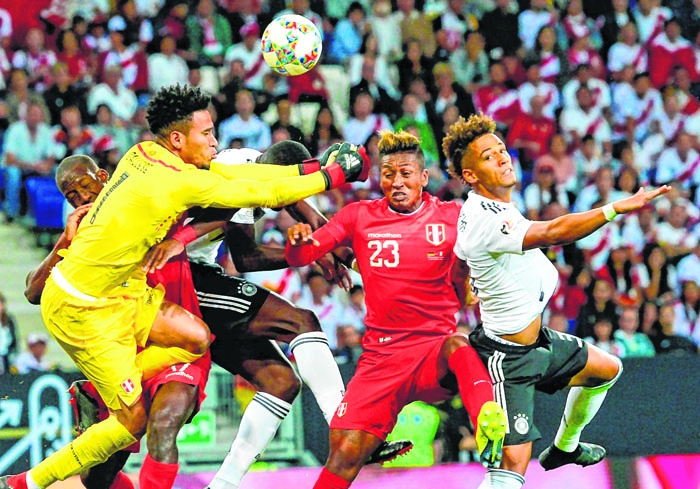 TOPSHOT - (R-L) Germany's defender Thilo Kehrer, Peru's midfielder Pedro Aquino and goalkeeper Pedro Gallese vie for the ball during the international friendly football match Germany vs Peru at the Rhein-Neckar-Arena in Sinsheim, southwestern Germany, on September 9, 2018. (Photo by THOMAS KIENZLE / AFP) / DFB REGULATIONS PROHIBIT ANY USE OF PHOTOGRAPHS AS IMAGE SEQUENCES AND QUASI-VIDEO. |

Sinsheim, Germany : Nico Schulz enjoyed a dream international debut on Sunday, as the Hoffenheim defender scored a late winner in front of his home crowd to give Germany a hard-fought 2-1 friendly win over Peru in Sinsheim.

Given his first cap for Germany in the stadium where he plays his club football, the 25-year-old Schulz put in a solid performance at left-back as the hosts came from behind to pick up their first win since crashing out of the World Cup in June.

Germany had prioritised defensive stability in their 0-0 draw with France three days earlier, but they were out to score goals in Sinsheim, and forced several chances in the opening 20 minutes.

Yet it was Peru who struck first, brutally exposing Loew’s side on the counter-attack in the 22nd minute.

In a moment reminiscent of Germany’s World Cup woes, Luis Advincula burst down the right wing and beat Marc Andre ter Stegen at the near post.

The lead lasted all of three minutes, as Julian Brandt levelled the scores with a delicate chip over Gallese. Timo Werner appeared to fire Germany in front ten minutes later, but was correctly called back for offside.

Both Werner and Ilkay Gundogan forced further saves from Gallese before half-time, while  tested ter Stegen at the other end.

Peru looked the more dangerous side in the second half, and ter Stegen was called into action again before the hour mark, scrambling across goal to keep out Pedro Aquino’s header.

Both sides continued to look vulnerable at the back, as chances fell to both Werner and Jefferson Farfan on the counter-attack.

The home side finally forced the issue in the 85th minute, as Schulz pounced on a loose ball in the final third and squeezed his shot underneath Gallese.