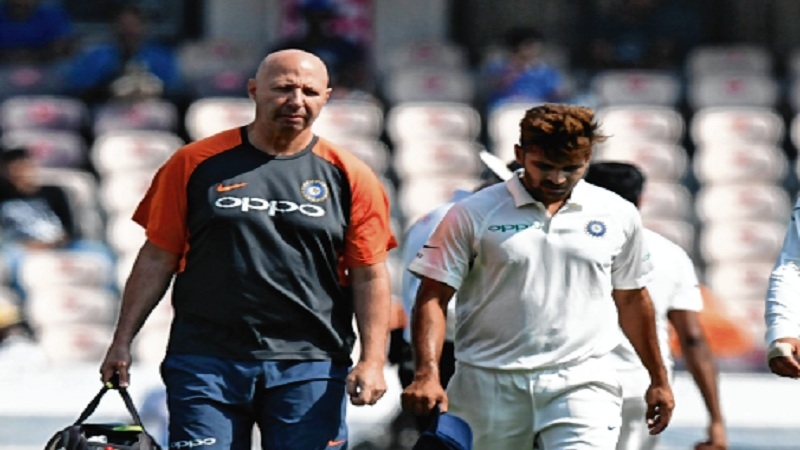 Hyderabad:  The National Cricket Academy’s (NCA) rehabilitation programme once again came under scanner after seamer Shardul Thakur’s Test debut against West Indies lasted a mere 10 deliveries due to recurrence of a groin strain sustained during the Asia Cup in Dubai. Incidentally, this new injury fiasco happened only two days after the Committee of Administrators (CoA) met the stakeholders in the cricket team for a much-hyped meeting trying to take a stock of Indian cricket.

After bowling the fourth delivery of the fourth over, which the West Indian opener Kieran Powell guided it past backward point, Shardul was seen in considerable pain as he started hobbling. Once physio Patrick Farhart came inside the ground, the pacer was seen showing what looked like a groin strain. He then left the field after a couple of minutes of deliberation with captain Virat Kohli and the physio. Ravichandran Ashwin completed Shardul’s over by bowling the last two deliveries. “Shardul Thakur has gone for scans. He will not take the field today. An update on his participation for the rest of the Test will be taken after looking at the scans and after being assessed by the team management,” read the official statement from Board of Control for Cricket in India (BCCI). This is the second time that the 26-year-old broke down in back-to-back international matches.

On September 18, during India’s Asia Cup opener against Hong Kong, Shardul had suffered “right hip and groin soreness after the game against Hong Kong”. However, 10 days later on September 28, he was back in action during a Vijay Hazare Trophy league phase for Mumbai but there were questions even then about his fitness status and how come he got the clearance from NCA. “Groin injury is a fitness related injury and not an on-field one. My question is how did Shardul get a fitness certificate within 10 days of complaining groin soreness and then it recurs within another fortnight. Strange,” a BCCI official, privy to NCA’s mode of functioning, said on Friday. The official also raised questions about NCA’s senior staff’s role in this injury conundrum. “COO Tufan Ghosh and Ashish Kaushik, who looks after the rehab of these contracted India players should answer. What sort of a clearance did he get? We hear big things about workload management but a bowler short throws other bowlers workload into a tizzy.

“If I am not wrong, one of the senior office bearers (treasurer Aniruddh Chaudhry) wrote about NCA’s functioning to the COA but there wasn’t any reply. So this NCA mess lands at COA’s doorstep,” the veteran official fumed. Multiple calls to Kaushik went unanswered while Ghosh remained unreachable. Shardul, who first got into the Test squad in 2016 in West Indies, has been a back-up pacer for more than two years before he replaced Mohammed Shami in the second Test that started on Friday. Shardul was a part of the Indian squad during the five-Test series in England but did not play a single game. He has so far played five ODIs and seven T20 Internationals.