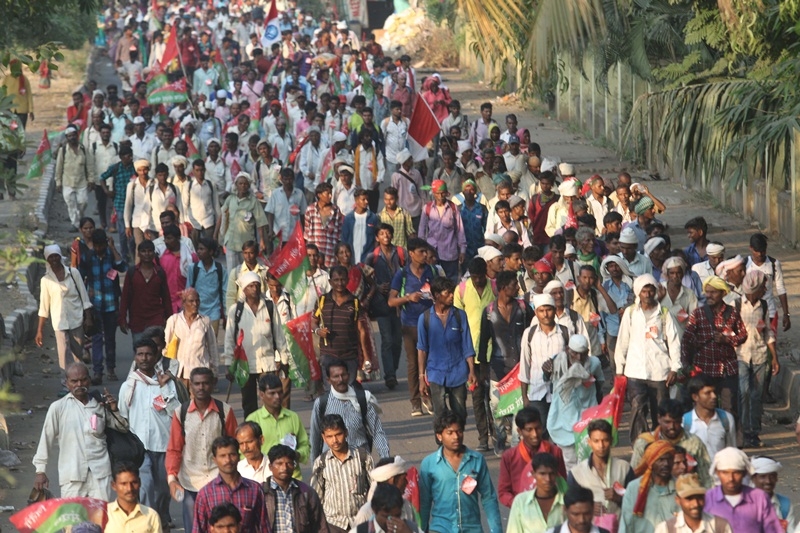 Mumbai: Thousands of farmers and tribals in Maharashtra, who set off on a two-day protest march from Thane and reached as far as Chunabhatti on Wednesday, will set off for Azad Maidan on Thursday.

These farmers from Nandurbar, Palghar, Chandrapur and Jalgaon will march from Somaiya ground towards Azad Maidan, where prominent leaders, including the ‘waterman of India’, Dr Rajendra Singh, will address the rally. The farmers are demanding the implementation of the Swaminathan Committee report, which has recommended that farmers must have assured access and control over resources such as land and water.

Their demands include an increase in the Minimum Support Price, drought compensation and the transfer of forest rights to tribals. Further, farmers are demanding proper implementation of the loan waiver package announced by the BJP-led government in the state last year, and compensation for farm labourers.

“We have been consistently asking the state government to fulfil our long-standing demands but the response has been lukewarm. We have been forced to launch this agitation. We are taking maximum care to ensure that Mumbai residents are not inconvenienced,” said the leader of the Lok Sangharsh Morcha, Pratibha Shinde.

Thousands of farmers and tribals reached Thane on Wednesday by train and road. On Wednesday afternoon, they set off on a padyatra and reached Somaiya ground, Chunabhatti, where they halted for the night. Magsaysay Award winner Dr Rajendra Singh, the well-known water conservationist and environmentalist from Rajasthan, is among the marchers.

In March, thousands of farmers, led by the Left-affiliated All India Kisan Sabha, took out a 180-km long march from Nashik to Mumbai in March to press for their demands. That protest saw a sea of red, formed by farmers in red caps, converge in Mumbai from across Maharashtra. This time around, a sea of red and green will be on display.

Tribals, who will participate in the protest march, have come well-prepared, equipped with enough food to last them for two days. Some supporters have made additional provisions for their meals and drinking water at Azad Maidan. Tribal minister Vishnu Savra is expected to meet a delegation of protesters at Azad Maidan on Thursday morning, before the assembly takes up their demands. Leaders of the opposition from both Houses too will meet Shinde and other leaders at Azad Maidan.