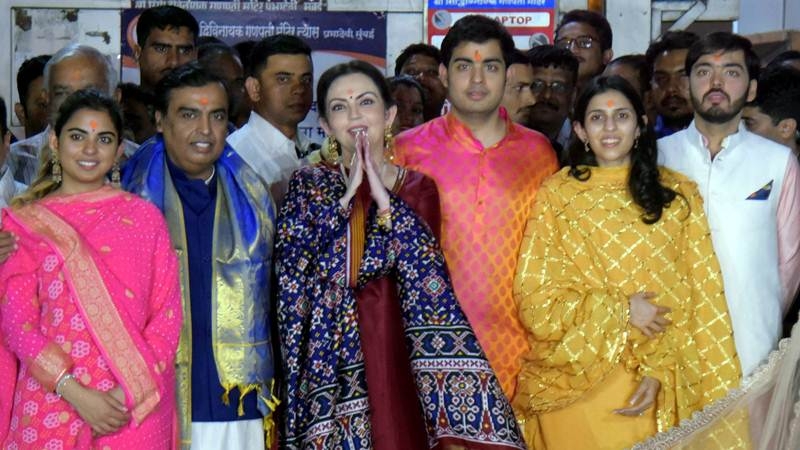 Mumbai: The Ambani family during their visit to Mumbai's Siddhivinayak Temple on Sunday after an engagement ceremony of billionaire Mukesh Ambani's eldest son Akash Ambani to Shloka Mehta in Goa. Shloka is the daughter of prominent diamantaire Russell Mehta. The newly engaged couple are reported to be married later this year. PTI Photo(PTI3_25_2018_000188B) |

Mumbai: A day after an intimate ceremony in Goa where Mukesh Ambani’s son Akash Ambani reportedly proposed his classmate Shloka Mehta, the Ambanis visited Siddhivinayak temple in Mumbai on the occasion of Ram Navami to seek blessings.

The Ambani family reached the temple earlier this evening. Shloka is the daughter of prominent diamantaire, Russell Mehta. The couple is reportedly scheduled to tie the knot later this year.

While Akash Ambani is the eldest son of Nita and Mukesh Ambani, India’s richest man who heads Reliance Industries, Shloka Mehta is the youngest daughter of Mona and Russell Mehta, who run Rosy Blue Diamonds. As per reports, Akash Ambani and Shloka Mehta studied together at the Dhirubhai Ambani International School in Mumbai and have known each other for years.