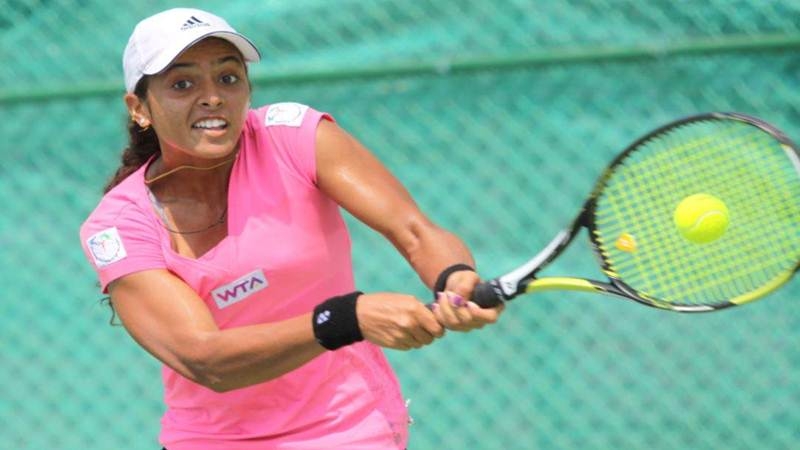 Mumbai: The Indian challenge in singles competition ended with a sluggish India No. 1 Ankita Raina losing in straight sets to Danka Kovinic (MNE) in the second round of the L&T Mumbai Open WTA $125K Series, organized by MSLTA and CCI at the CCI courts, Churchgate on Thursday. Struggling to find her rhythm and not appearing her sprightly self, Ankita seemed to be suffering from the effects of her hard fought three set victory over Rutuja Bhosale in the first round that finished past midnight on Wednesday.

A brief fight back in the second set was all Ankita can take solace in before crashing out 2-6, 5-7. In other second round matches, top seed Zheng Saisai of China booked her spot in the quarter-finals with a straightforward 6-4, 6-2 win over Bibiane Schoofs of The Netherlands as also fifth seed Luksika Khumkhum of Thailand, who got the better of Barbora Stefkova (CZE) 6-3, 6-4. Ankita, who had made the quarter-finals of this event last year, may have fancied her chances against Danka, but not being 100 per cent meant she was broken four times in the first set and though she got back one of her own, lost it 2-6.

The second set began in similar fashion, with an early break against her, but the Indian, always a fighter, hung in to not only break back but level scores at 4-4 and go ahead 5-4 with another break. However, Ankita could not serve out the set and was broken again to lose the advantage. Danka, sensing victory, then held for 6-5 and broke Ankita again to wrap up the match. In late night action on the centre court on Wednesday, Raina had a struggle on her hands and had to bring all her experience and court craft to the fore to get the better of her training partner Rutuja Bhosale 4-6, 6-2, 7-6 (5), the match ending past the midnight hour.