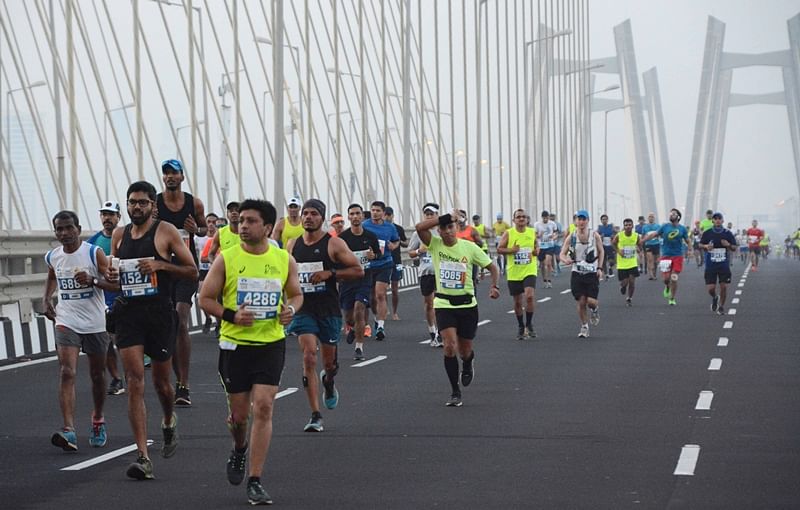 Mumbai: The 15th edition of the Mumbai Marathon on Sunday morning saw more than 44,000 participants hitting the road — 2,000 more runners than last year. But despite the large attendance, the palpable enthusiasm of the previous marathons was clearly lacking among the participants, largely due to the blistering heat.

Of course, thousands of Mumbaikars happily dragged themselves out of bed at the break of dawn – an unusual sight on a Sunday.  Runners warming up in trains and ‘stretching’ at railway stations also made for a pleasant sight. Initially, there was the usual excitement but as the day wore out and the temperature started rising, it sapped the enthusiasm of the ‘amateurs’ and first timers who had been prepared a day earlier by the Met Department for cooler climes.

Even the popular Bollywood music beats and loud cheers failed to put the fizz back into the run.  The marathon was also a little low on the glam quotient; though there were the usual fitness buffs from tinsel town — Milind Soman, Rahul Bose, Kunal Kapoor, Mandira Bedi, Kajal Agarwal – but the ‘big banners’ were conspicuous by their absence.

Also Read: Mumbai Marathon 2018: Most celebrities give this marquee event a miss

Possibly, the timing of the marathon had something to do with the lack of ‘hype’ – usually, the Marathon takes place in the second week of January but this year the organisers pushed the event a week ahead. To add to their discomfort, the participants had to grapple with prickly heat and a relentless sun that had them hopping like peas on a hot tin roof.

The Ethiopians were, however, not too happy with the last lap in which they had to take sharp turns to negotiate the Metro work sites. It had visibly upset their rhythm, constraining them to slow down several times to go around the Metro ‘corners’.  This was duly ‘acknowledged’ by the winner of the woman’s full marathon, Amane Gobena.

There were also the usual mismanagement issues, and participants found the dearth of signposts on the race tracks frustrating. Also, several participants, including Gobena, complained of lack of proper drinking water facilities at regular intervals. This despite the organisers’ claims of having 27 water stations which had a stock of nearly 1.50 lakh litres of water for the event.

The organisers could, however, draw consolation from the fact that this year there was a dip in the number of runners who collapsed in a heap; just 2000 were provided with preliminary aid, as against 2500 such cases last year. Also, this year only two participants were rushed to nearby hospitals, while last year 11 marathoners were hospitalised – mostly due to de-hydration. Among those who presided over the event was the Governor of Maharashtra.