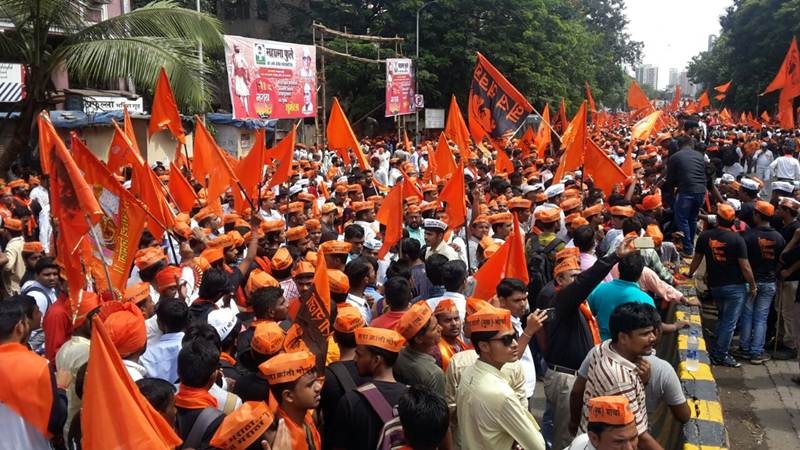 Mumbai : The largest morcha Mumbai will witness in recent times is expected to take place on Wednesday. Police have made it clear to citizens that they should use alternate routes, change trains from central to western line and avoid snarl points. The morcha will begin from Byculla zoo and go up to Azad Maidan, near Chattrapati Shivaji Maharaj Terminus. The route would be through Mohammad Ali Road.
The traffic police have made elaborate arrangements ahead of the Maratha Kranti Morcha scheduled on Wednesday for which at least 2,500 traffic personnel have been deployed, which includes traffic warden who would be deployed on the stretch between Jijamata Udyan and Azad Maidan in order to cater to vehicular traffic.

Traffic police officials said that maximum traffic personnel would be deployed on the Eastern Express Highway (EEH) where maximum vehicular movement is expected.

“As there would be more people coming from areas like Thane and Pune on the EEH, we have planned more police deployment on this highway. We have made maximum arrangements in order to ensure smooth traffic flow,” said Amitesh Kumar, Joint Commissioner of Police (Traffic).

Traffic officials have urged people to avoid taking the roads between Byculla Zoo to Azad Maidan between 9am to 5pm on Wednesday. Traffic police officials said that they would also update citizens through their official Twitter handle and radio.

The restrictions on the traffic would come into force two hours before the scheduled time at 9am, when protestors are expected to assemble near Byculla Zoo. The rally would begin moving at 11am from Byculla and would reach Azad Maidan.

The BrihanMumbai Electric Supply and Transport (BEST) bus services would be hit as the core area of the morcha will be blocked by protestors. The bus services between Byculla to CSMT will be completely shut due to the rally. The bus routes from Dadar to Plaza, King Circle to P D’Mello Road and N M Joshi Marg to Lower Parel would be diverted to Worli Naka. Taxi services towards south Mumbai are also likely to be hit due to the rally.

Ready for a sea of people Suggested alternative routes:

Eight special services would be operated during the non-peak hours by the Railways. At least 75 Railway Protection Force (RPF) officials have been deployed at stations like CSMT, Byculla, Mulund, Kurla, Wadala, Belapur and Vashi. Assistant Security Commissioner will supervise arrangements at CSMT. Extra ticket windows would be opened at several stations to allow the participants to purchase daily tickets. One extra general coach will be attached to at least seven long distance trains

20 Lakh Marathas expected to take part in The largest morcha, Mumbai is set to witness in recent times on Wednesday. Police have made it clear to citizens that they should use alternate routes, change trains from central to western line and avoid snarl points

Parking vehicles coming to Bhakti Park can use the space at Port Trust for parking their vehicles. For the rally participants, the traffic police allowed them to travel via Bhakti Park below the Eastern Freeway
Routes shut South-bound route on Dr. Babasaheb Ambedkar Road between Dadar Fire Brigade and start of JJ flyover will allow only fire tenders, police, ambulance and emergency service vehicles. JJ Flyover to CSMT junction for both north and south-bound traffic. Hazarimal Somani Marg between OCS junction and CSMT junction. Mahapalika Marg between Hutatma Chowk and CSMT junction.Right turn from Bhatia Baug towards CSMT

Schools to remain shut
Around 500 schools in South Mumbai will be shut on Wednesday due to the Maratha Morcha. Moreover, schools at Sion, Mahim, Dadar, Worli and Byculla to Colaba will be shut

the rally format
Children will be right in front girls and women senior citizens followed by medical professionals, lawyers, male volunteers who will ensure litter and trash is cleared as the participants leave. No politicians or any leader will be allowed to dominate the morcha. Only authentic banners, tee-shirts will be allowed. It is a silent morcha and no slogans will be shouted