Mumbai: Goddess came in disguise of woman cop to help her devotee 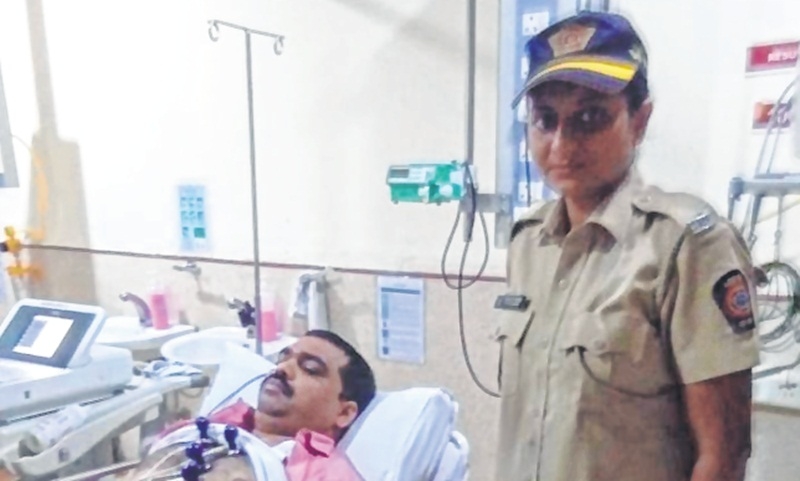 MUMBAI: The goddess Durga came in disguise of a female police constable and saved a fellow policeman on Wednesday, which marked the first day of Navratri. Manisha Vispute, who is attached to Kherwadi police station played the good samaritan as she saved the life of a fellow constable who was feeling uneasy due to chest pain and rushed him to a private hospital for treatment.

According to sources, on Wednesday at 8.30am, when Vispute, who was on night duty, is attached to the anti-chain snatching unit. She along with another cop had parked their police vehicle on Bandra-bound Western Express Highway (WEH). All of a sudden she saw a man sitting along the WEH on a pavement with his bike parked on the side. Vispute approached the man and identified as Kiran Sangle, a police constable attached to the Aarey police station. Sangle informed Vispute he had to sit aside because he was suddenly feeling unwell and was under treatment at the Marol-based private hospital.

Seeing a rather frazzled looking Sangle, who looked unwell and unstable, Vispute immediately took permission from her senior to take the police mobile van number 5 to the hospital. The team drove swiftly and safely rushed Sangle to the Seven Hills Hospital at Marol and admitted him for further treatment. A senior official from Aarey police station said, “Police constable Vispute was a saviour and we need more such police in the force. The bravery and calmness she displayed in such a tensed situation was outstanding.” The woman who ran to help or as stated, a goddess in disguise said, “Due to the severe pain in the chest, Nikam looked debilitated and since it was dark I couldn’t see his real condition. My instinct told me to rush him to the Seven Hills hospital and we did so, within15 minutes. Later I informed his wife, who couldn’t thank me enough.”