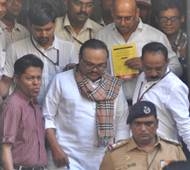 Mumbai :In a fresh development, the doctor who had been accused of helping NCP leader Chhagan Bhujbal, has been transferred to Raigad even as he has approached the Maharashtra Administrative Tribunal and sought a stay.

The controversial medical officer, Dr Rahul Ghule was earlier posted at Arthur Road Jail and had been accused to helping Bhujbal in getting admission at St. George’s Hospital even though he only had tooth ache. It had been reported that Bhujbal had actually been referred for a tooth problem, but Dr Ghule manipulated the records and had got the former minister admitted to the hospital on various grounds. Following these reports, Dr Ghule had been repatriated to his parent department and the jail administration had initiated an inquiry into the matter.

According to Dr Ghule, he received an order earlier this week in which he has been transferred to a rural hospital at Raigaddistrict.”This is completely unfair to me, since there is no departmental inquiry against me from the directorate of health services, which is my parent department,” he explained.  Even the medical committee that had been set up by JJ Hospital to look into the matter had said that the diagnosis of Bhujbal indicated that he had multiple symptoms and needed admission to the hospital, he pointed out.

Therefore, he has challenged his transfer order and has approached the MAT for cancellation of his transfer, Dr Ghule said.