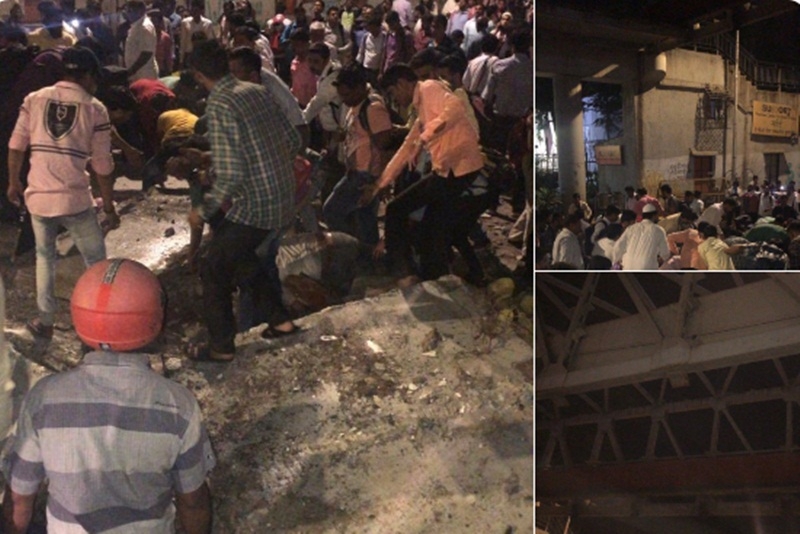 Mumbai: Five persons were killed and 34 persons injured after a major portion of a foot overbridge near a train station in south Mumbai collapsed Thursday evening, officials said. The bridge connected the bustling Chhatrapati Shivaji Maharaj Terminus railway station with the Azad Maidan Police Station. All the injured have been rushed to nearby hospitals, a disaster management cell official said.

An eywitness said when the bridge collapsed, there was a red light at the nearby signal, and that is why the death toll was contained. Another eyewitness said the overbridge was being used despite repairs being carried out this morning. The bridge which connected the area near the Times of India building with the iconic CSMT station was commonly knwon as ‘Kasab bridge’ after the 26/11 Mumbai attack terrorist passed through it during the terror attacks. The incident took place around 7.30 pm when a major portion of the bridge caved in, the official said.

Some motorists who were passing beneath the bridge when it came down, were among those injured, he added. “Fire brigade personnel reached the spot immediately and rescue work is in full swing. We have appealed the motorists to avoid the D N road to JJ flyover section,” he said. “Foot over bridge connecting CST platform 1 north end with B T Lane near Times of India building has collapsed. Injured persons are being shifted to hospitals. Traffic affected. Commuters to use alternate routes. Senior officers are on spot, Mumbai police tweeted.

Maharashtra CM Devendra Fadnavis: Pained to hear about the foot over bridge incident near TOI building in Mumbai. Spoke to BMC Commissioner and Mumbai Police officials and instructed to ensure speedy relief efforts in coordination with Railway Ministry officials. pic.twitter.com/ep0UqG43CZ

Raj Purohit, BJP MLA on portion of foot over bridge near CSMT Railway station collapse: It’s unfortunate, it shouldn’t have happened. Action should be taken against the engineer who gave certificate to this bridge in auditing, he should be arrested. He should be punished. #Mumbai pic.twitter.com/Qzx55j0j7s

Maharashtra Minister Vinod Tawde: The state will provide for the treatment of the injured…We will give further update to you as and when we get information. https://t.co/ajojZvoh63

Foot over bridge connecting CST platform 1 north end with B T Lane near Times of India building has collapsed. Injured persons are being shifted to hospitals. Traffic affected. Commuters to use alternate routes. Senior officers are on spot.