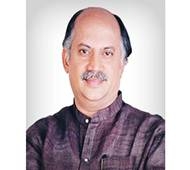 Loyalists to stage protest at MRCC

“It is inappropriate to express displeasure over party decisions at the time of elections. We are trying to contact him and pursue him back to active politics.”

Mumbai: Senior Congress leader Gurudas Kamat, on Tuesday, said that he would be active in the field of social service, even as his supporters announced to hold demonstrations at the MRCC office on Wednesday.

“I’ve taken the decision after giving it a good thought and there is no reason to go back on that,” Kamat, who announced his decision to retire from the politics, said here on Tuesday, while speaking to his party workers.

Kamat also made it clear that he has decided to retire from politics and not from social service. “I shall keep working for the common man,” he told his supporters.

Several of Kamat loyalists had gathered at his Chembur residence ever since the news of  his decision to retire from politics spread across the city. They chanted slogans to urge him to reverse his decision.

“It is inappropriate to express displeasure over party decisions at the time of elections. We are trying to contact him and pursue him back to active politics,” former Chief Minister and senior party leader Prithviraj Chavan said. However, there was no reaction from party office-bearers in Mumbai.

Kamat loyalists said that they have contacted party high-command to try to convince Kamat that the party needs him while preparing to go in for the Municipal Corporation elections.

Kamat was AICC general secretary and he was in-charge of Gujarat and Rajasthan. But, he had been sulking since he was not taken into confidence in part affairs related to Mumbai. Kamat had been unhappy since Sanjay Nirupam was made president of Mumbai regional Congress. His resentment was so intense that there were rumours during Rahul Gandhi’s recent Mumbai visit that Kamat would keep away from the party function.

Kamat, whose rise in the party is attributed primarily to his proximity with the first family of the party, had lately got a feeling of being left out. Rajya Sabha election was a trigger point, when he was not accommodated and former finance minister P Chidambaram was given a seat from the city.

Indications of Rahul’s probable elevation to the party’s top post turned out to be the last straw and he decided to quit politics, party insiders said.