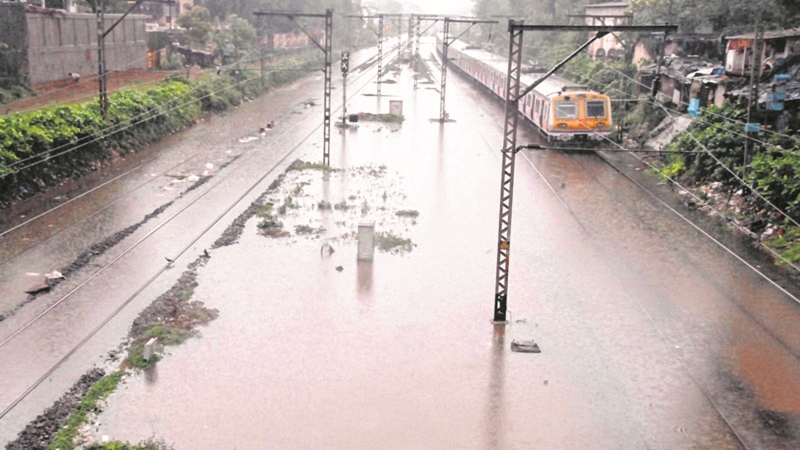 Mumbai: Heavy rains lashed Mumbai on the first day of the work week. Monday morning’s steady downpour caused waterlogging in low-lying areas and disrupted local train services on Central, Western and Harbour lines. Railway tracks were flooded at Sion and Thane, leading to delay in services. But commuters barely complained this morning, though there were disruption and around 50 trains were cancelled. Trains were delayed by 15-20 minutes. Office-goers made it to work, although they were slightly late.

According to Central Railway, services on all three lines (Main, Harbour, and Trans-harbour lines) were running 7-10 minutes late. Trains between Thane and Byculla stations were running late by 15-20 minutes and trains on WR were delayed by 10-15 minutes.  CR officials said trains were delayed, some services were cancelled or diverted. “There is some water accumulation at Sion due to continuous rains but trains are running on all three lines of the Central Railway with a slight delay of 5 to 7 minutes,” said Sunil Udasi, Chief Public Relations Officer, CR.

Commuters waited patiently for their trains, delayed only by 10-15 minutes. “Railways seem to have learnt a lesson after the heavy rains on June 9, which saw trains being cancelled and delayed. Today, despite heavy rains, trains were running smoothly without causing inconvenience,” said a commuter, Mayur Patankar.

WR services were delayed due to track failure near Bandra station. “Local trains are 5-10 minutes late due to a technical problem at the Bandra station. Inconvenience is regretted,” tweeted Sanjay Mishra, divisional railway manager. Further, he tweeted that the trains have been delayed due to low visibility in some areas because of the rains. All mail express trains were expected to arrive late at Bandra Terminus, Dadar Terminus and Mumbai Central because of heavy rain between Virar and Surat.