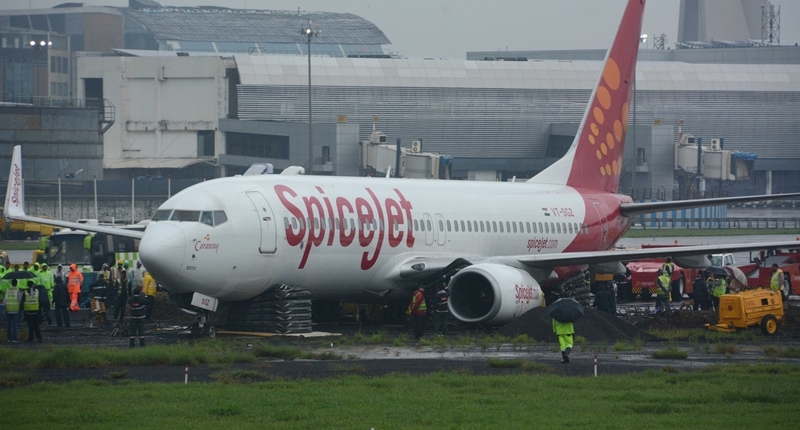 Mumbai: The civil aviation ministry has sought details from the Mumbai airport authorities about the flights that were cancelled and losses suffered by the airlines during the non-operation of the main runway following the skidding of a SpiceJet aircraft earlier this week.

The ministry has also directed the airport authorities to provide details about the losses suffered by the carriers due to the non-operation of the main runway for over 25 hours, a source said. Over 183 flights were cancelled and dozens of others diverted to the nearby airports after a SpiceJet Boeing 737 aircraft skidded of the runway after landing from Varanasi on Tuesday due to heavy rains and got stuck in mud,  blocking the traffic on it.  “The Ministry has asked the the city airport authorities for the same,” an officer said.

Besides, the ministry has also asked the airport authorities to give details about the flights that were diverted to other airports, the official said. It has also sought details of the losses suffered by the airlines due to the large-scale disruptions in operations from the late evening of September 19 to late night of September 20, the official said.

Mumbai airport is run under a joint venture company, Mumbai Airport International Airport Limited (MIAL), in which GVK-led consortium holds 74 per cent stake and the rest 26 per cent are held by the Airports Authority of India (AAI).       Mumbai airport has two crossed runways. While operations at the main runway can go up to 45-48 flights in an hour, the secondary runway can handle up to 38 flights at a given time. Overall, there are 930 flight arrivals and departures at the Mumbai airport every day.

However, the secondary runway can perform limited operations due to the fact that it has shorter length, obstacles in flight path and varying wind patterns. In an exercise undertaken by the joint engineering team of national carrier Air India and private airline Jet Airways, the aircraft was removed from the runway almost 24 hours after it got stranded.