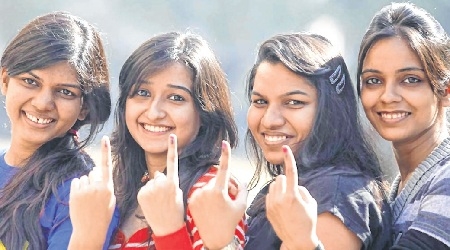 Indore: From women safety in public areas including transport, to gender equality, girls would consider issues that affect their day-to-day life before pressing that important buton on the EVM. Unclear on most grounds about analysing politics and competence of candidates, they feel it is easier to vote for the party that cares about their problems and ensures to solve them.

In an interaction, graduation students of Shri Vaishnav Vidyapeeth Vishwavidyalaya talked about various issues that affect their lives and will be poll issue. “Girls are harassed every day and even by cops, who are ideally expected to protect us,” 19-year-old art student Disha Shrimal said. Sharing the story of most girls in the college, she talked about rude behaviour and threatening acts of policemen.

“Most cops will not think twice before calling a girl characterless or insulting her in public and it is definitely a change I expect from our new government,” Disha said. Though transport is being provided in the city through bus, it still needs safety and rules as explained 18-year-old BA 2nd semester MuskhanSoni. “We have ibus, where there is normally a strict rule against men entering female compartments, but that is not the case with city buses,” she said.

“Being honest, I do not know much about politics, but I do know that government in power should be protecting women and not making our lives difficult,” 19-year-old BA student 2nd semester Aakruti Chandrorikar said. She would consider voting for the party that would at least not harm the peace in city.

“I understand the importance of voting and the power it holds in determining our future, but it is very confusing to make a choice,” 18-year-old art student Kajal Changediya said. She quoted the importance of security in the city and appreciated cleanliness initiative. “I feel there is an urgent need to control gangs of boys and eve–teasing, but I doubt that any party would genuinely act upon it,” Kajal said. 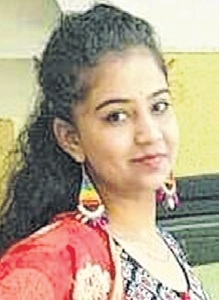 Stronger government needed for gender equality
The only way to control crime against women is to change the mind-set of people. We need every child, adult and senior to respect women and men. We need a country where people respect every being, animals, caste, culture and festivals. I want such a government that can truly influence and change people. Our country is in need of a revolution and that cannot come without an strong government. I feel strongly about the gender inequality and caste discrimination, so my vote would go to the party that is willing to work on these issues.