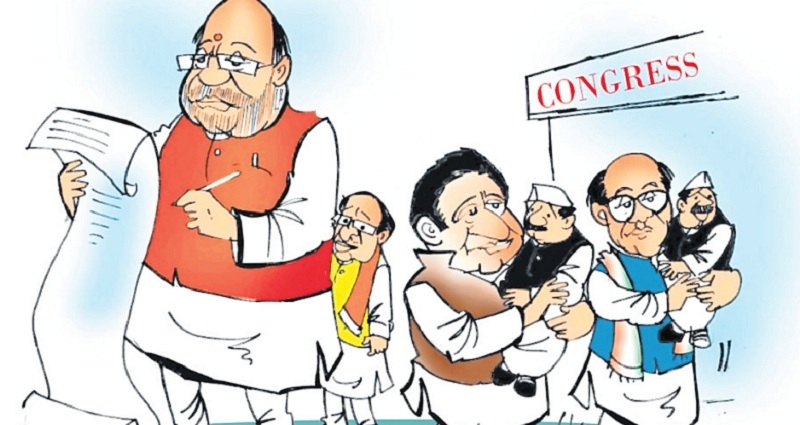 Ujjain: With indications suggest that Kamal Nath and Digvijaya Singh would have an upper hand in the distribution of tickets to Congress candidates in the state in general and Malwa region in particular, party stalwart and MP Jyotiraditya Scindia has also started exhibiting that he would have a last laugh.

Sources said hectic parleys were being held at party HQ in New Delhi after 2- day successful tour of Rahul Gandhi to Malwa-Nimar region. Digvijaya holds full command on these regions, but ironically remained absent during Gandhi’s tour. It is said that he does not have wish to campaign actively anywhere now and after declaration as well on the pretext that he would manage the dissidents. Sources said that a bungalow is being furnished at Bhopal now-a-days from where Digvijaya would conduct his operations, but would not address any public meeting.

It is said that the central election committee (CEC) of Congress has been meeting twice a day to discuss and finalise the candidates list forwarded by the scrutiny committee headed by Madhu Sudan Mistry. Barring urban seats of Bhopal, Indore and Ujjain, selection of candidates on most other seats has been finalised and the first list is likely to be announced within a couple of days. Though the CEC is likely to finish the process by November 1, the second and third list may be out by November 3 and 5, respectively, as disclosed by sources requesting anonymity. Meanwhile, indications suggest that Scindia’s supporters have got fewer seats as compared to other leaders. Ajay singh joins hands with nath, digvijaya Not only Digvijaya Singh but leader

On Ujjain North, Kamal Nath is vying for corporator Maya Trivedi as she is a new and comparatively young face. Digvijaya has tactically forwarded the name of corporator Azad Yadav, but as Scindia has vetoed everybody for the sake of clearance of Bharti’s candidature, announcement of list for Ujjain district may be delayed. Digvijaya wanted Rajendra Vasishtha from Ujjain South while Nath camp has forwarded the name of Chetan Yadav.

Only one thing common among the senior leaders is that at least one Brahmin candidate should be fielded from Ujjain North and South. As indications suggest, names of Dilip Singh Gurjar (Nagda-Khachrod), Surendra Singh Sisodia (Barnagar), Ramlal Malviya (Ghattiya), Sardar Singh Chouhan (Mahidpur), Mahesh Parmar (Tarana) and Rajendra Vasishtha (Ujjain South) have been almost finalised. All these six persons belong to Nath-Digvijaya camp.

But, when they took Ujjain North seat on consideration, Scindia came vocally and bet for Rajendra Bharti, who represented the constituency in 1998 election but lost the 2003 election. Presently, Bharti is a PCC vice-president. He belongs to other backward class while upper castes including Brahmins and Vaish along with Muslim-Bohra communities enjoy dominance in the constituency. “This was the reason that Scindiaji publically called Bharti on dais during Gandhi’s public meeting on October 29 at Dussehra Maidan in Ujjain and introduced him to the later.

At that time Bharti wore saffron kurta and red dhoti and introduced him as Mahant of Mangalnath temple,” sources reminded. Scindia did so just as to showcase that despite being an OBC candidate, Bharti is a Mahant of a temple and, thus, would be able to garner supported of Brahmins in this election as well. This fact also supported Bharti in 1998 election and at that time Madhavrao Scindia was his mentor. But, decision to finalise candidate on this seat was kept under discussion and Gandhi has reportedly asked all the state leaders and screening committee to send only one name to him and not two or three names, sources said. 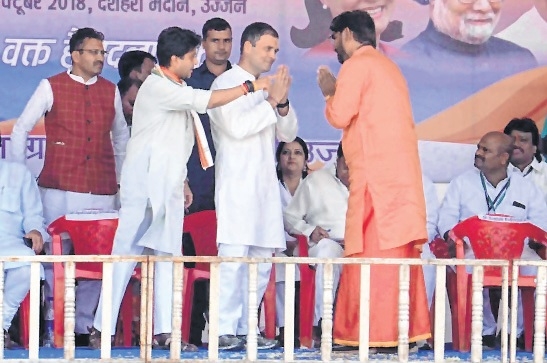