Modi ‘working for uplift of poor like a saint’: Mukhtar Abbas Naqvi 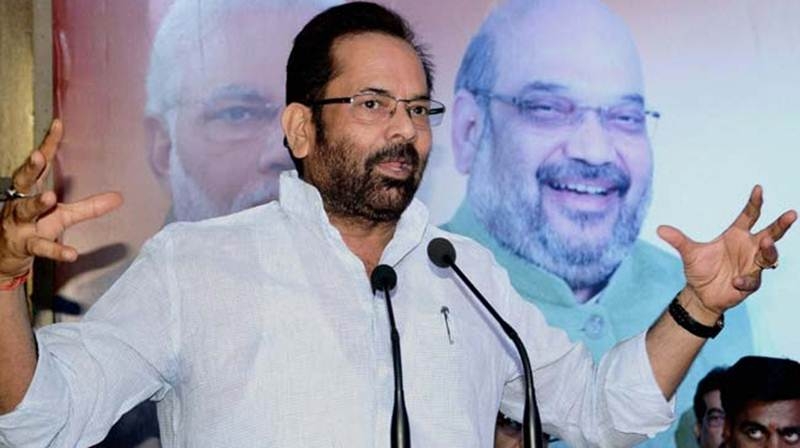 Naqvi also hit out at Rahul Gandhi for criticising Modi and RBI, saying the Congress vice president should take note of “lessons” people are teaching his party by defeating it in municipal polls held after invalidation of Rs 500 and Rs 1000 currency notes.

“We agree initially there were some lacuna (in implementation of demonetisation) which are being addressed with support from people. We feel there is inconvenience, but no pain.

“The pain is not there because the one who is at the helm of country’s affairs, the Prime Minister, is an honest person. He is working with a strong resolve for the uplift of poor like a saint,” Naqvi said.

The Minister of State for Minority Affairs (Independent Charge) made the remarks on the sidelines of second leg of ‘Cashless Chaupal’ organised here by his Ministry in its bid to connect minorities to cashless economic system.

Deriding Gandhi for stating that RBI has been changing rules post demonetisation “like the PM changes his clothes,” Naqvi said the “brand new leader of the grand old party” is writing last chapter of “Congress-free India dream” by making such comments.

Naqvi also asked Gandhi to take cue from his party’s defeat in Chandigarh and other civics polls, post demonetisation, in which the BJP put on impressive show

“Now in Chandigarh, people taught a lesson that they should not oppose the anti-black money fight. Earlier, they gave a message through municipal council polls. They will receive more such messages,” the Minister added.

Naqvi reiterated that “given those below poverty line” mainly include minorities, digital transactions “which eliminate role of middlemen minting money” will prove beneficial for the weaker sections.

“For instance, we started distributing scholarships to minority students through direct benefit transfer (DBT). The result is: we could eliminate middlemen and plug 50 per cent leakage. Three crore students were benefited thus,” he added.

The Minister exuded confidence that the model of digital transactions-based economy will be successful in India and cited example of how the world’s largest democracy embraced electronic voting machines (EVMs) “notwithstanding earlier apprehensions.”

A presentation was also made by NITI Aayog representatives during the event on modes of cashless transactions.