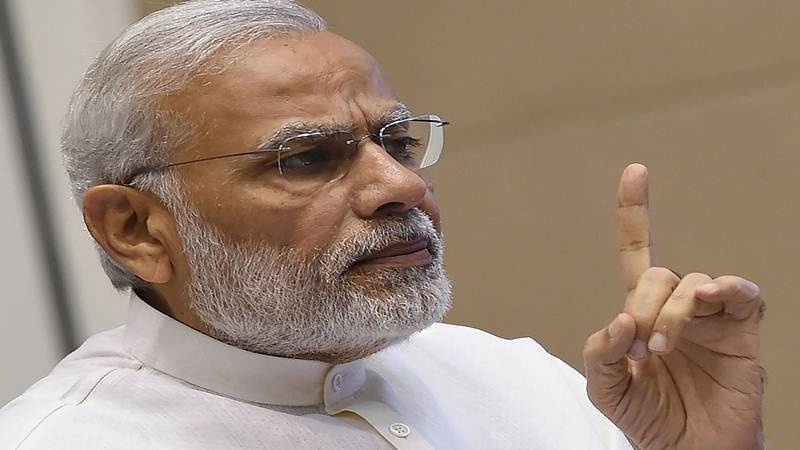 Kangra/Paonta Sahib (HP): Prime Minister Narendra Modi today ridiculed the Congress as a “laughing club”, and launched a blistering attack on the party’s government in Himachal Pradesh, accusing it of looting public money.

Corruption was the leitmotif and Congress the target as the prime minister made a strong pitch for the BJP on his first campaign tour since the election was announced.

Modi, who addressed rallies in Kangra and Paonta Sahib, touched on various issues, including the Dokalam crisis with China, Kashmir and the Army, as he lashed out at the Congress ahead of the November 9 assembly election.

He accused the Congress of plundering public money and said his government had taken on the responsibility of ending corruption.

It was not the Congress of Mahatma Gandhi or of freedom fighters but of corruption and dynasty politics, he said in Kangra.

”The party is an example of a rotten thought process. When we ask for a Congress-free India, we want an India free of this thinking.”

People across the country were engaged in Swachhta Abhiyan and were “wiping out” the old party whenever they got the opportunity through elections, Modi said.

The Congress had promised zero tolerance on corruption when its own chief minister, Virbhadra Singh, was facing allegations of graft, he said.

It was time to rid “Devbhoomi”, or the land of the gods as Himachal Pradesh is known, of monsters, he asserted.

“I feel the Congress has become a laughing club. The chief minister is himself out on bail…”

He asked the crowd whether it could digest the fact that such a chief minister had released the Congress manifesto promising to combat corruption.

Targeting Congress vice president Rahul Gandhi for meeting the Chinese ambassador during the stand-off in Dokalam earlier this year, Modi said, “The leader whose father, grandmother and father of the grandmother were PMs of India, and who has been born and brought up in the ruling family, is acting in an insulting way.”

The prime minister also brought up India’s first prime minister Jawaharlal Nehru with a reference to the Jan Sangh, which he said was created to counter the Congress through the efforts of leaders like Shanta Kumar, a former chief minister of the state and a BJP candidate.

The Congress, he added, must introspect on why people were punishing it and turning away from its leaders. “But one needs to have soul to introspect.”

Modi also accused the Congress of allowing the growth of “daanavas”. “It is time to save Himachal Pradesh from those who looted it…from the monsters,” he added.

Exhorting people to come out to vote in large numbers, he said he wanted record polling this time.

“I know we will win anyway, because I have worked in Himachal and know the pulse of the people of this hill state… You have the opportunity to dismiss those who looted the state by pushing the right button on November 9,” he said.

He continued the theme in Paonta Sahib.

The NDA government, he said, was combating corruption through technology and the direct transfer of subsidies to beneficiaries had not only saved Rs 57,000 crore but also ended corruption.

“The government closed down over two lakh shell companies. The probe into the functioning of just 5,000 companies revealed irregularities of Rs 4,000 crore… we can only guess what would be the total amount involved but all those who looted the money will have to pay it back,” he said.

Asserting that the Congress government had failed to give employment to the youth, Modi said his government’s slogan is “Bachho ko Padhai, Yuva ko Kamai, Buzurgon ko dawai” (Education to children, employment to youth and medicine to elderly people).

A new era of development would be ushered with a BJP government at the Centre and in the state.

Castigating the Congress for raising questions on the surgical strikes last year, he said no party or individual had ever questioned the credibility of the Army.

“The Congress has insulted the Army and sacrifices made by jawans to defend Kashmir… it was shameful that no leader dared to criticise the senior leader who demanded greater autonomy for Kashmir,” he said.

In his view, the Congress was a group of non-serious people, who did not know what they were doing or saying.

He also alleged that the UPA government had misled jawans on the issue of “one rank, one pension”(OROP) and said his government had not only fulfilled its promise but already paid three installment of arrears.