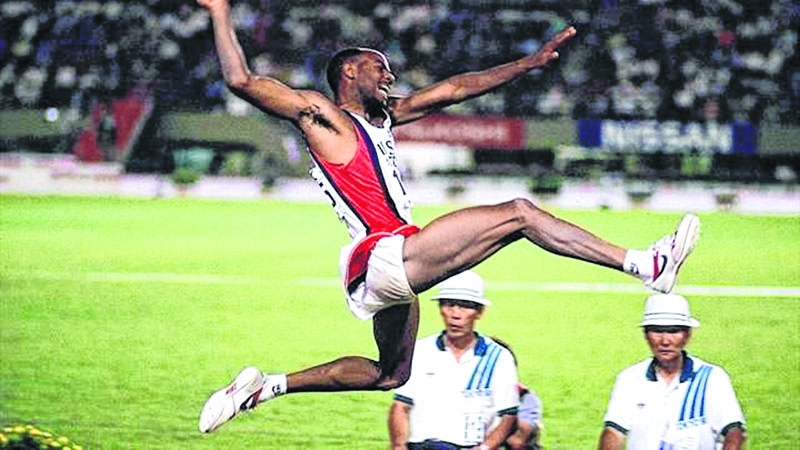 Powell rated Usain Bolt, Jesse Owens and his fiercest rival Carl Lewis at the top, but feels the Jamaican sprinter could have gone past the 9m mark had he tried.

Kolkata : Track and field legend Mike Powell doesn’t doubt the talent of modern athletes but feels they lack hunger and that is precisely the reason why his world record of 8.95 metres in long jump still stands intact even after 26 years.

“There has always been good young talents out there but they don’t have the same type of expectation and hunger that I had when I was competing,” the legendary American athlete said. “I was competing with the likes of Carl Lewis and many more at the highest level, so I had very high expectations from myself. Jumpers now-a-days are really talented but they don’t have the same mentality,” said the two-time Olympic silver medallist, who is here as brand ambassador of the 25K Run event slated for December 17.

A nine-metre jump still remains a dream for athletes and the 54-year-old is one among them, who still regrets of losing the hunger after achieving the world record in Tokyo 1991. “I was really hungry and inspired before I broke the world record. I feel sad that my record is just 8.95. I think it should be at least around 9.10-9.15 to be more comfortable,” Powell said. “I definitely don’t think I got the best out of myself. But then I started getting injuries and got older. When you become a world champion and a world record holder then your focus and motivation changes a little bit,” he added.

Powell, however, hopes his world record would remain untouched. “If a jumper is doing like 8.50 plus I start to pay my attention and get a bit nervous. I mean records are meant to be broken but I don’t want to lose mine. I like to be the world record holder and not the former,” he said. “But one day will come when someone else would also do it. I know one day it will happen. Maybe someone coached by me will go past that.”

Powell rated Usain Bolt, Jesse Owens and his fiercest rival Carl Lewis at the top, but feels the Jamaican sprinter could have gone past the 9m mark had he tried. “I think Bolt could have jumped nine had he trained for it,” the 1991 World Championship record holder said.

Powell’s logic is based on elementary physics that the faster you can take off, the further you will be able to jump. Bolt had clocked a top speed of 12 metres per second at 40m mark en route to his world record 9.58s at the World Championships in Berlin in 2009. Going by the basic distance-speed-time formula, an ideal jump in such a scenario would be a massive 14.68.

Asked about his all-time greatest athlete, Powell gave a diplomatic answer. “Potentially it’s Bolt but I would have to give it to Carl (Lewis) and maybe even Owens because he broke four world records in one afternoon,” he said. Bolt might have hung up his boots, but Powell said athletics will get its new star soon. “Earlier everyone was saying what’s going to happen after Bolt finishes. They were saying the same thing about Carl Lewis, then Michael Johnson came in. “There are plenty of talents, someone will come in and fill the void. Hopefully it will be a number of people and I don’t think it will be good to have just one person. There was a golden era when I was competing and maybe we will get back to that,” he said. Powell has not won a gold medal in Olympics having lost to Lewis but he is happy being a world record holder.