MK Stalin attacks PM Modi: Teach a lesson to govt that is trying to saffronise India 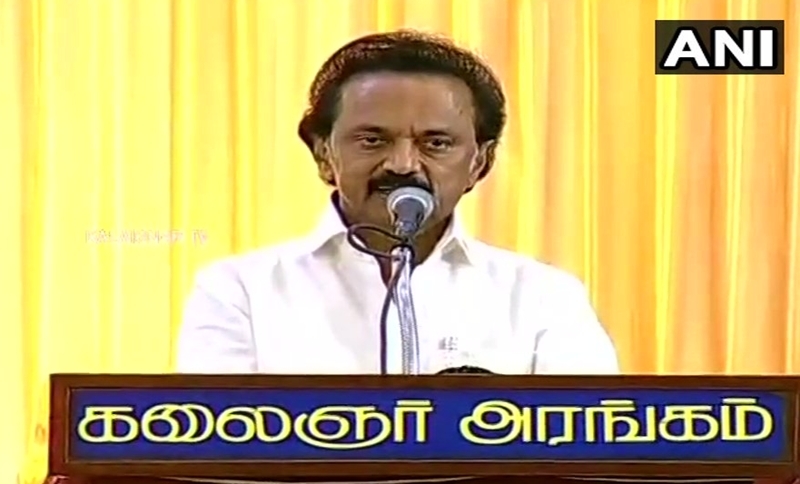 Chennai: Silencing critics who felt the DMK may be tilting towards the BJP, newly elected party President M.K. Stalin on Tuesday launched a stinging attack on Prime Minister Narendra Modi saying his government was trying to saffronize India.

“Come, teach a lesson to the Modi government that is trying to saffronise India,” Stalin said in his first address after taking over the Presidential post that was held for five decades by his late father and former Chief Minister M.K. Karunanidhi. And to cheers from the hundreds of party delegates at the General Council meeting here, Stalin added: “We will oppose any party that wants supremacy of one language.”

Stalin said the rights of state governments were being trampled upon and the Modi government needed to be taught a lesson. He also appealed to the DMK cadres to throw out the “anti-people and spineless AIADMK government” in Tamil Nadu. Stalin said the DMK won’t flinch from the policies of social justice laid down by Dravidian icon E.V. Ramaswamy ‘Periyar’.

While declaring that the DMK was not “anti-God”, he said the party won’t go back on the rationalist policies of Periyar. Stalin promised that the DMK’s new leadership would reflect the views of the party members and supporters.

Confessing that he was not a patch on his late father and did not possess the command over Tamil language like he did, Stalin said: “I have the attitude to try out everything.” From now on, he said he was a different Stalin and would take the DMK and Tamil Nadu towards a new future.