MK Alagiri rally: ‘One lakh people came to support me, will DMK send all of them out?’, asks Stalin’s brother 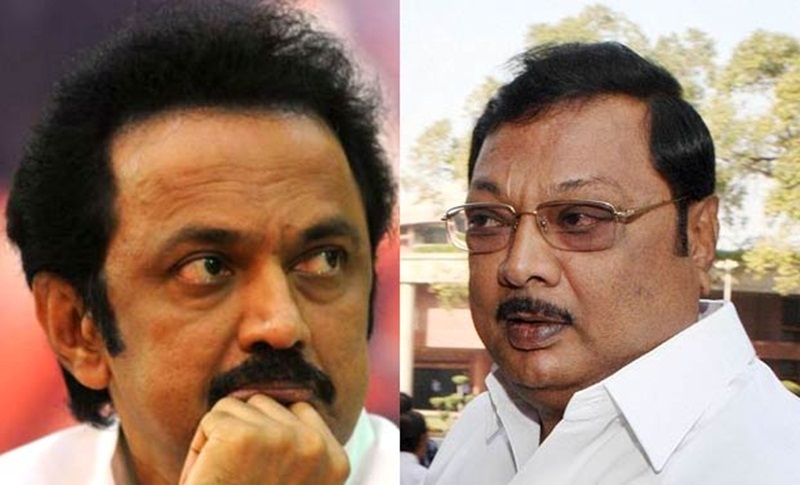 Chennai: Sacked DMK leader MK Alagiri‘s rally, billed as a “massive show of strength” to press for his re-induction, was a tame affair Wednesday with the usually abrasive son of M Karunanidhi sparing party chief M K Stalin any criticism, a move seen as extending an olive branch to his younger brother.

Alagiri, a former union minister who was expelled from the party by his father and the then DMK boss Karunanidhi in 2014 at the height of the siblings’ tussle for supremacy, was expected to breathe fire and brimstone at the rally ostensibly called to show his strength but the event ended not with a bang but a whimper.

The once strongman of Madurai, clad in a black shirt and dhoti as a mark of mourning for his father, was said to have mustered around 10,000 people for the rally that began from Wallajah Road junction and concluded at Karunanidhi’s mausoleum on the Marina beach, 1.5 km away. He stood on an open-top van with his loyalists holding banners hailing him as ‘Anjanenjar’ (Braveheart).

Alagiri’s close family members–son Durai Dayanidhi and daughter Kayalvizhi– besides a few hardcore loyalists, including former deputy mayor of Madurai Corporation P M Mannan, also wore black for the occasion and followed him to Karunanidhi’s grave where they paid floral tributes to the DMK stalwart.

Contrary to expectations, not a single DMK functionary was present. The DMK had recently sacked a village level leader Ravi for shaking hands with Alagiri.

No speeches were delivered nor any grand action plan announced, but Alagiri showed some of his characteristic belligerences when he dared the DMK leadership to sack partymen supporting him.

“One lakh people came here to support me today. Will they (DMK) send all of them out? You ask them and let me know,” Alagiri told reporters.

“There is no intention behind the rally other than paying homage to Kalaignar,” he said. Karunanidhi was often referred to as ‘Kalaignar’ (the artiste) or ‘Thalaivar’ (the leader) by his ardent supporters.

Days ahead of the rally, Alagiri, locked in a running feud with Stalin over succession, had made a climbdown and said he was ready to accept his younger sibling as his leader if the party reinducted him.

The Karunanidhi family projected a united picture when the DMK chief was fighting a battle for life in a Chennai hospital for 11 days before his death on August 7. However, days after his death the bitter succession war erupted again with Alagiri claiming “all true and loyal supporters of Kalaignar” were with him.

Alagiri, who was leading a life of political exile in Madurai away from media glare, had even warned that the DMK will dig its own “grave” if it did not take him back.

However, Stalin’s election as DMK president on August 28 apparently made Alagiri rethink his plans and end political grandstanding. Sending out a signal that he was prepared to bury the hatchet just two days after Stalin’s elevation, Alagiri said he was ready to accept the leadership of his younger brother if he was readmitted into the party.

“When we desire to be inducted into the party, we must then accept the (Stalin’s) leadership. Isn’t it?” Alagiri had told reporters.

He, however, blew hot and cold and seemed to question Stalin’s elevation in the same breath.

“Is the general council alone the party? Do 1,500 members of the council alone represent the DMK? The cadres are on my side. After next month’s rally more will come to my side,” he said.

Before his expulsion at the height of his succession battle with his brother, Alagiri, known for his mercurial temper, had famously questioned if the DMK was a “mutt” where the pontiff could anoint his successor, an apparent reference to their father.

Though Alagiri was effectively out of politics since his expulsion, few had any doubt about the leader trying to reclaim the space he once had in Tamil Nadu politics after his father’s death. Alagiri wielded considerable clout in the southern districts of Tamil Nadu as the DMK organisation secretary for the region. Whether he retains that clout after four years of political hibernation remains to be seen.

The DMK had failed to open its account in the last Lok Sabha elections in 2014 and lost to the AIADMK in the assembly polls in 2016 when Stalin helmed the campaign after Karunanidhi began keeping indifferent health.

Now, as he leads the party into the Lok Sabha polls next year, he is up against a formidable opponent in the ruling AIADMK besides the fledgeling Amma Makkal Munnetra Kazhagam (AMMK) of former AIADMK leader T T V Dhinakaran.

Actor Kamal Haasan’s ‘Makkal Needhi Maiam’ is likely to make its election debut, and so possibly would the proposed party of superstar Rajinikanth.

With so many claimants for a share in the electoral pie, Stalin would have to strain every sinew to ensure the DMK finishes at the top of the table. If Alagiri succeeds in mobilising even a chunk of DMK cadre in his favour in southern Tamil Nadu or persuade them to be passive during the polls, he could mar the party’s chances at the hustings.