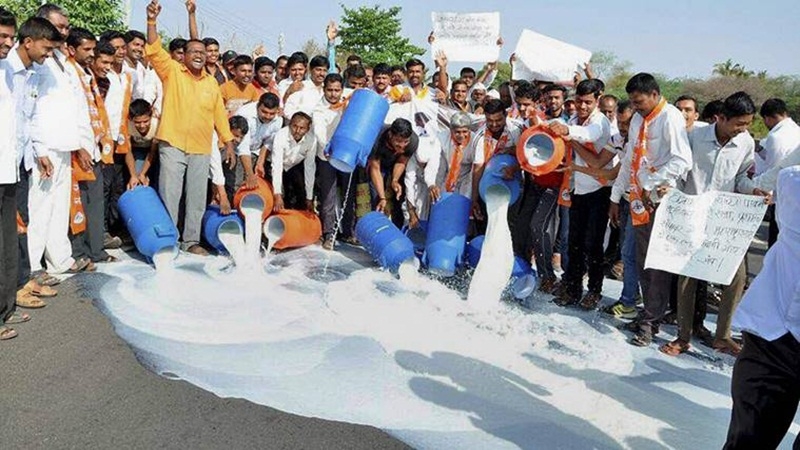 Mumbai: Swabhimani Shetkari Sanghatana chief Raju Shetti, who is leading the dairy farmers’ strike, has dismissed as “rumours spread by the ruling Bharatiya Janata Party” the news that the state government had brought in milk from neighbouring Gujarat to Mumbai.

“Not a single drop of milk has entered Maharashtra’s border either by train or road,” Shetti claimed. He has threatened to intensify the strike from Thursday and has planned a day-long 30,000-strong cattle blockade on the Pune-Bengaluru highway. Dairy farmers plan to blockade the Pune-Bengaluru highway at Kini-Vathare village at the boundary of Sangli-Kolhapur, with more than 30,000 cattle on Thursday. Ravikant Tupkar, state president of SSS said, no milk entered from Gujarat in Maharashtra. Tupkar claimed the Devendra Fadnavis-led state government does not want Shetti to become a hero with this strike and hence, to foil the strike, has spread rumours that milk came from Gujarat. Meanwhile, it appears that the issue may be resolved at a meeting called by union minister Nitin Gadkari and others at New Delhi on Thursday.

On the third day, the strike spread across Vidarbha, Marathwada and North Maharashtra region. Shetti was on dharna at Dahanu Road railway station on Wednesday morning and agitators stopped trains coming from Gujarat. The Maharashtra government had announced it would bring in milk through railway wagons from Gujarat. However, daunted by the prospect of agitators, the railways retracted its decision to attach milk wagons to passenger trains. Later, Shetti and his agitators proceeded to the Ahmedabad-Mumbai highway to stop milk tankers.

Also Read: Milk Strike in Maharashtra: All you must know about dairy farmers’ protests

An official from the dairy development department said on condition of anonymity, “We have a stock of around 20 lakh litres of milk at the Amul Dairy centre, Boisar, in Palghar district. It was collected before the strike was called on July 16. However, ever since, we are unable to procure milk from Gujarat. Milk pouches from the bordering Nandurbar in Gujarat and from Western Maharashtra were supplied by farmers not supporting Shetti’s strike. They used smaller village roads, bypassing highways to approach Mumbai,” he claimed.

“Mumbai needs around 40 lakh litres of milk per day, whereas the total demand for milk in the Mumbai Metropolitan Region (From Palghar-Vasai on western line to Karjat-Khopoli-Kasara on Central Line) is around 70 lakh litres,” said Shri Naik, dairy expert. He claimed Mother Dairy, Amul, Aarey, Mahananda and Nandini Dairy have full quota of milk available with them, while Gokul has a shortfall of 2.5 lakh litres, Warana of 30,000 litres and Prabhat, by 10,000 litres.

Tupkar said Mumbai, Pune and Sangli-Satara-Kolhapur have suffered a lot on account of the strike. “Small cities can manage with milk from local villagers. But metros like Mumbai and Pune are wholly dependent on milk from outside and hence, from today, these cities will suffer shortage or a no-milk situation,” he said. “Pune receives milk from Baramati, but Baramati too has stopped milk collection, which will affect Pune. Chitale Dairy in Pune has exhausted its stock and downed shutters. Amul Dairy, which has a collection of 12 lakh per daily came down to 1 lakh litre. This collection shows how the situation is quickly souring for Mumbaikars,” said Tupkar.