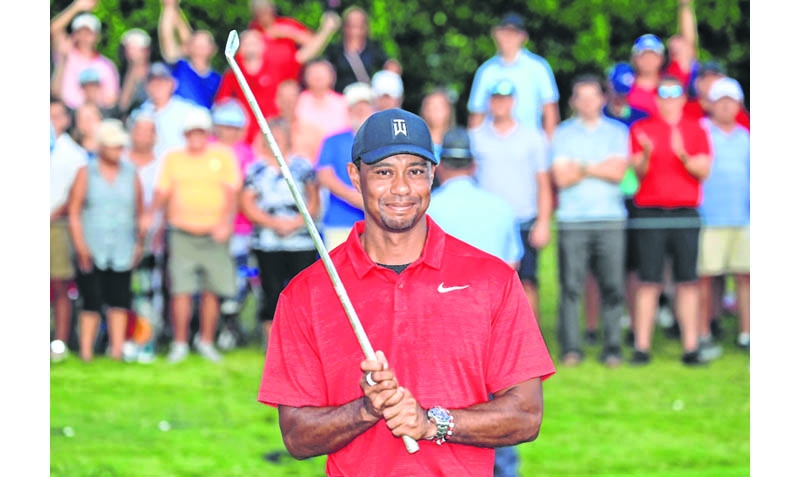 ATLANTA, GA - SEPTEMBER 23: Tiger Woods of the United States poses with the trophy after winning the TOUR Championship at East Lake Golf Club on September 23, 2018 in Atlanta, Georgia. Sam Greenwood/Getty Images/AFP == FOR NEWSPAPERS, INTERNET, TELCOS & TELEVISION USE ONLY == |

Atlanta : Phil Mickelson led the praise for Tiger Woods after the former world No.1 ended a five-year title-drought with victory at the Tour Championship here Sunday.

Mickelson, who will face Woods in a lucrative head-to-head shoot-out in Las Vegas in November, said he had never doubted that the 14-time major winner would add to his collection of PGA Tour titles.

“He’s played such good golf all year that it is just not surprising,” Mickelson said.

“Tiger’s played so well on a very difficult golf course and we almost kind of expected it. We never doubted he would not win again, not from what I’ve seen he’s been swinging the club and the way he’s being playing. It was just a matter of time.”

The victory lifts Woods tally to 80 PGA Tour titles and just three wins shy of becoming the most successful player in the history of the PGA Tour.

Mickelson meanwhile said he is looking forward to joining up with Woods for this week’s Ryder Cup in Versailles, despite a disappointing showing in Atlanta which saw him finish on 13 over par.

“It was not the week here I would have liked heading into any big tournament but next week in France is going to be totally different with different grass, different course and different everything so we’ll see,” Mickelson said.