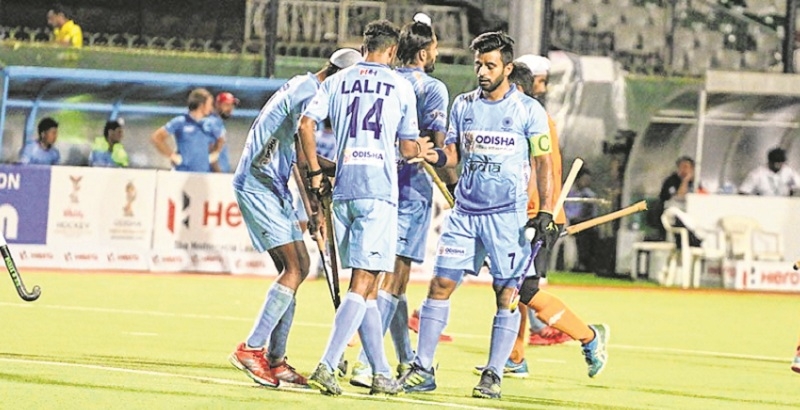 Muscat: Defending champions India will look to assert their continental supremacy once again when they take on reigning Asian Games gold-medallists Japan in the semi-final of the Asian Champions Trophy (ACT) hockey tournament here on Saturday. Having spanked Japan 9-0 in the round-robin stage, India will start overwhelming favourites against the Asian Games champion side.

India are the only side in the tournament that remained unbeaten in the round-robin stage, having won all their matches except for a close goal-less draw against old nemesis Malaysia. India qualified as the top team with 13 points from five games. Arch-rivals Pakistan finished second on 10 points ahead of Malaysia on account of a better goal difference, while Japan were fourth with seven points.

The ongoing Asian Champions Trophy being the last tournament before the season-ending World Cup in Bhubaneswar, the Indians would be desperate to prove their critics wrong with another strong performance on Saturday. Going by performance, the Indians looked the dominant side in the tournament with convincing wins except for the stalemate against Malaysia. Harendra Singh’s men defeated Oman 11-0, Pakistan 3-1, Japan 9-0 and South Korea 4-1. And come Saturday, India would be eager to prove that the disappointing bronze at the Asian Games was just an aberration with another big morale-boosting win over Japan.

India’s chief coach Harendra Singh said Saturday will be a completely new game for his side. “I would like my boys to play aggressive hockey with control over their emotions. The semi-final will be a different ball game. The result or score-line of our last encounter with Japan in the preliminary league will have no significance when the semi-final gets underway on Saturday,” Harendra said on the eve of the match. Japan, on the other hand, have fielded six youngsters in the squad after their gold medal at the Jakarta Asian Games in their bid to focus on a long-term team-building exercise.