Kabir Café, a unique music band with five young talented musicians, brings the simple and eternal wisdom of one of India’s most loved poets into an urban space, writes Mallika Iyer

“We didn’t choose Kabir. Kabir chose us!” says Mukund Ramaswamy, member of Kabir Café, a Neo-Folk Music Band that presents the poetry of the 15th century bhakti saint, in a contemporary style, drawn from Classical Carnatic and Indian Folk fused with Rock and Reggae. The words are moving, the lyrics reflecting the eternal wisdom of Kabir. The music is uplifting, set as it is in a unique combination of various styles. Their energy is contagious and their love for the poetry of Kabir rubs onto the audience almost instantly.

“It’s not just about music and melody. It goes deeper than cords and rhythm. It is about Kabir and the beauty of his simple philosophy,” explains Raman Iyer, member of the band.

The band members met and came together about four years ago from different cities and backgrounds, music being the only common thread between them. Neeraj Arya, the founder and lead vocalist of the group is a self-trained musician from Delhi. He brings a stylish flair to the age-old lyrics of Kabir’s wisdom through his contemporary style. Neeraj has sung with two other bands before and also works with National Streets for Performing Arts and Music Basti. Mukund Ramaswamy, the violinist of the band, is Mechanical Engineer and a trained Carnatic musician. He gave up his corporate job to follow his passion for music and adds a classical Carnatic twist to the songs.

Raman Iyer, who plays the mandolin, is also trained in the classical tradition of Hindustani and Carnatic music. He gave up his job in Advertising to pursue music full-time, after he experienced a change within him at a subconscious level, due to the soulful verses of Kabir. Viren Solanki, the percussionist, a disciple of Fazal and Taufiq Qureshi, adds an upbeat rhythm and pace to the music with the djembe. Coming from a family of folk musicians who also happened to be Kabir panthis, Viren was the only member of the group whose path had crossed with the poet-visionary before. The fifth member of the band is Poubuanpou Britto KC from Manipur, who grew up with a very different style of music than the others. Britto sings and plays the bass guitar. Together, they discovered the wisdom of Kabir, and since then there has been no looking back. 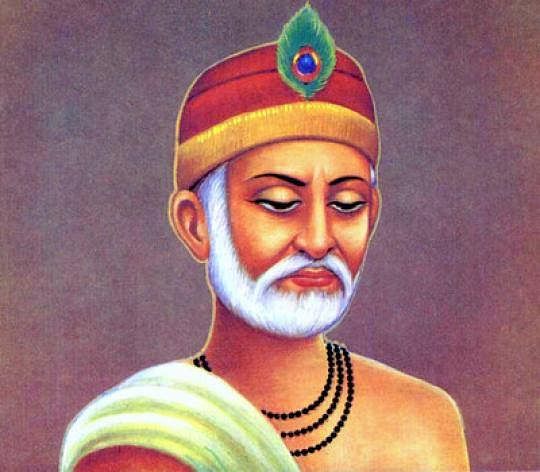 “Kabir never goes out of fashion,” explains Raman. “His words appeal to everyone – to people of all ages, diverse backgrounds and different religions. His philosophy resonates with mystics and with ordinary people. And has been doing so for over 600 years!’

Kabir composed in Awadhi and Braj and his poems have been adapted into several languages. And while his songs are sung today in a wide variety of languages from Urdu to Kutchi, the group is currently exploring the Malwi shaili (style) of the bard which comprises over 170 works of Kabir from the Malwa region. The words are often not clearly discernible for a modern urban audience and hence during their shows and workshops, they take care to explain them in a contemporary fashion so that listeners of all ages and backgrounds can relate to them.

“A café has a casual approachable air about it. It is a place where one can have conversations and begin a dialogue. That is precisely the environment we want to re-create around the music of Kabir,” says Raman, when asked about the story behind the group’s name. They feel strongly about bringing out the esoteric mystic wisdom of the poet and making it accessible to ordinary people such that it finds its way into contemporary thoughts and conversations, particularly amongst the youth.

Four years after they began, Kabir Café has over 850 shows in 10 countries under their belt. They have composed tracks for Bollywood films like Hindi Medium and Badshaho. Last year they released an album called Panchrang – Musical Echoes of Kabir which contains a collection of 11 of songs and one instrumental piece.

Attached to the roots

The band though performs a lot of songs by Kabit, Zara Halke Gaadi Haanko and Moko Kahan Dhoonde re Bande remain their favourite works by the poet. Several musicians – both classical and folk – have explored the poetry and philosophy of Kabir over the ages. Classical artists from Kumar Gandharva to Rock music groups like Indian Ocean have dug into the works of the bhakti poet to find material for their music. And this band, dedicated solely to the works of the mystic saint, is rising in popularity. For the eternal wisdom of Kabir is perhaps more relevant today than ever before. “Being together and believing in Kabir is our only vision,” says Neeraj while talking about their plans. When asked what the future holds in store for them, pat comes the mystical reply from Britto, “Our Journey is our Destination!”