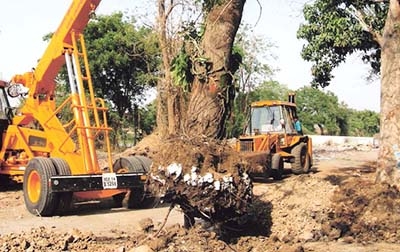 Bhayandar : As a result of urbanisation and infrastructure related construction works, the twin-city of Mira Bhayandar has already lost a good part of its vital green cover including precious and rare trees. A large number of trees have also been uprooted by none other than the Mira Bhayandar Municipal Corporation’s (MBMC) Tree Authority under its ambitious ‘Green Transplantation’ project. However massive irregularities have surfaced in the project.

As per information sourced out under the Right to Information (RTI) by former corporator Omprakash Garodia, MBMC’s Tree Authority claims to have relocated 424 trees that proved to be a hindrance for various developmental works including road widening and construction of new DP roads across the region. Outsourced to a private contractual company, the Tress Authority has spent Rs 35 lakh towards the relocation of 424 trees which works out to a whooping Rs 8,250 per tree.

“After inordinate delays, officials reluctantly provided a list of spots where the trees according to them had been relocated. However, as we went around inspecting spots, half the number of trees as claimed by the Tree Authority were missing, clearly hinting at a massive corruption in the entire project,” alleged Garodia who has demanded a high level probe into the matter. Sensing the seriousness of the issue, civic chief Achyut Hange has assured to conduct an immediate review and take action against responsible personnel if any irregularity has taken place.

Interestingly, the photographic evidence submitted by Tree Authority officials to substantiate their claims seems to be a desperate eyewash attempt as a large number of photographs depicting the post and pre-transplantation spots of trees have the same background providing ample material of their alleged misdoings.