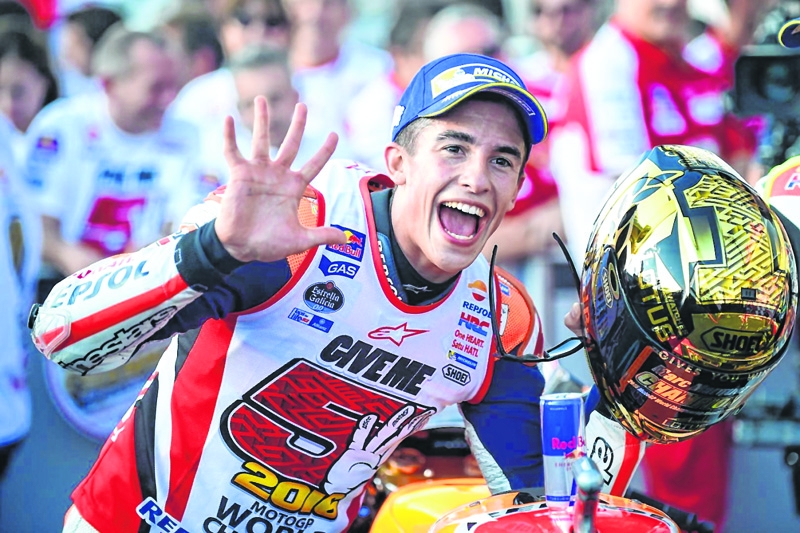 The race was won by his Repsol Honda teammate Dani Pedrosa.  The Honda team secured a ‘triple crown’ comprising the constructor, rider and team championships.

Incidentally, Marquez and Pedrosa scored the most podium finishes this year – 12 and nine respectively, making the Repsol Honda Team the most successful of 2017, with eight double podium finishes. Marquez, who had started on pole, extended his career count to 73 (45 in MotoGP), with the eighth of this season coming in Valencia.

Apart from the four MotoGP world titles, he also has two titles in the lower classes. Marquez and Pedrosa were off to a strong start, entering the first corner in first and second positions, but Frenchman Johann Zarco seized the lead on lap four.

Marquez stuck to him for 20 laps and then made the pass, but immediately ran wide at turn one and almost crashed. He made one of his signature incredible saves but dropped to fifth behind Zarco, Pedrosa, Jorge Lorenzo and Dovizioso.

Pedrosa, who had been closely chasing them, engaged the Frenchman in a battle for the win and finally passed him on the last lap. In the meanwhile, crashes by both Ducati riders allowed Marquez to celebrate his sixth title.

“I’m living a dream. ‘Six Titles’ are big words,” he told reporters after the race.

“The truth is that I’m incredibly happy because we worked so much this year, and today the race was incredibly tense and exciting—a bit Marquez Style,” he added.

About the near crash, he said it was a mistake adding he also made the best save of his career.