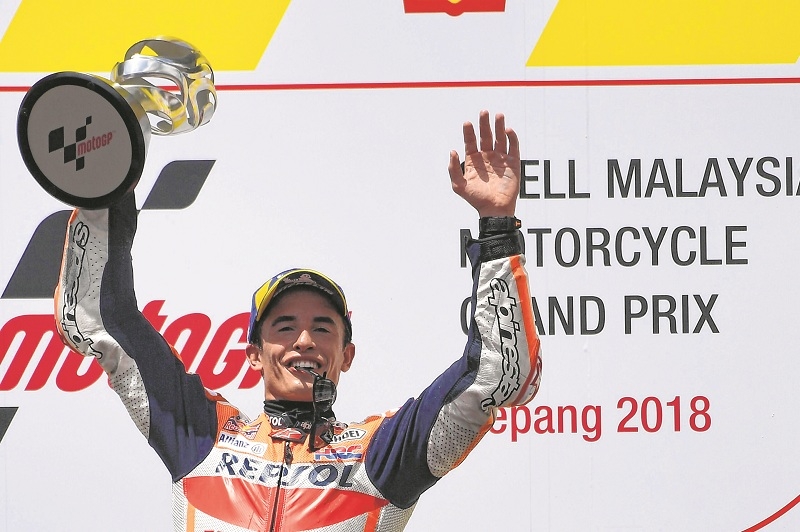 Repsol Honda Team Spanish rider Marc Marquez celebrates on the podium with the trophy after winning the Malaysia MotoGP at the Sepang International Circuit in Sepang on November 4, 2018. (Photo by Mohd RASFAN / AFP) |

Kuala Lumpur: Newly-crowned world champion Marc Marquez clinched his ninth victory of the season after Valentino Rossi crashed during the 16th lap of the Malaysia MotoGP. Starting the race in seventh place after being penalised in the rain-hit qualifying round on Saturday, Marquez grabbed the second position early even as Rossi produced a dominating show to emerge as the leader. With just four laps to go, Rossi slipped at the first turn of the 16th, allowing Marquez to take control over the proceedings.

Marquez had sealed his world title in October in Japan. His Honda team mate Dani Pedrosa ended at a creditable fifth place, 6.190 behind him as Repsol Honda sealed the constructors’ title. Marquez secured the win with a timing of 40.32.372mins, while Rossi finished 18th in the end. “I was feeling good towards the end and was trying to catch Valentino but when I saw him make that unfortunate mistake, I calmed down and just finished the race,” Marquez said. Team Suzuki Ecstar’s Arins finishes second, while Tech 3 Yamaha’s J Zarco was third.