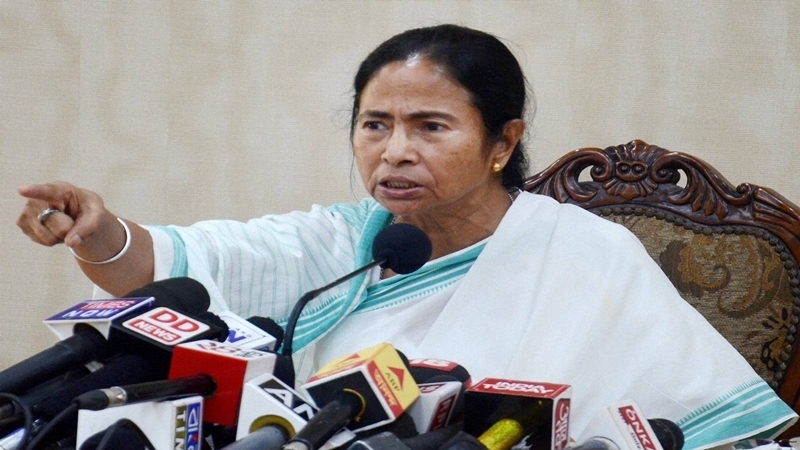 Kolkata: West Bengal Chief Minister Mamata Banerjee on Friday lashed out at Prime Minister Narendra Modi for ‘replacing’ Mahatma Gandhi in the diary and calendar of the Khadi and Village Industries Commission (KVIC) and said a day might come when Modi might try to replace Gandhiji on the Indian currency notes.

“Today Modi-ji is seen spinning the charkha (wheel) replacing Gandhiji in the calendar of Khadi. Gandhiji’s charkha! Father of the nation. Can you imagine,” Banerjee wondered.

“Which way is the country heading? No one is protesting against this out of fear. Maybe after a few days you will see his picture on new currency notes. What’s happening to this country,” she asked.

Earlier in the day, Banerjee questioned the move on Twitter.

“The great symbol of charkha and Mahatma Gandhi now gets replaced by Modi babu. Gandhi ji is the Father of the Nation. Modi ji what?” she asked in another tweet.

“I want to put one question. How could LIC come in touch with the Rose Valley? How could they work together? I want to know. Will the Finance Minister or Prime Minister be arrested,” she queried.

“An artist like Tapas Paul is arrested but an artist associated with the BJP hasn’t been touched even after taking facilities from Rose Valley,” she added.

The Rose Valley Group of Companies was being investigated by central agencies like the Central Bureau of Investigation in connection with the multi-billion rupee chit fund scam.

Taking a swipe at the central government’s demonetisation move, Banerjee said, like everyone else the artists across various sectors are impacted by the unprecedented cash crisis.

“I know the artists are suffering as many cultural shows and programmes got cancelled this year. All the sectors, including theatre and Jatra, are struggling. People don’t have money to spend on basic amenities, how would they spend on entertainment,” Banerjee said at the opening ceremony of a folk theatre festival in North 24-Pargana district’s Barasat.

“Ask the performers of Jatra if they had adequate show bookings this year after the note ban. I am sure they haven’t,” she said.