Maharashtra Kisan March: We have accepted most of their demands, says CM Devendra Fadnavis 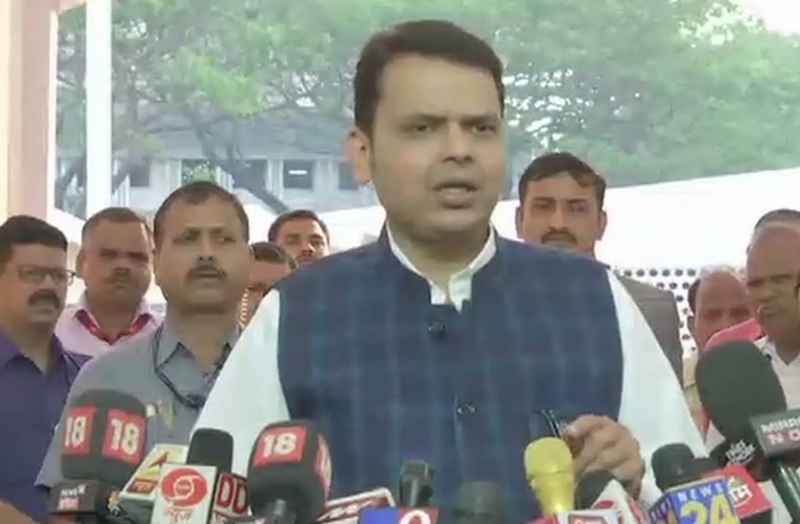 Mumbai: The meeting with a delegation of farmers and all political parties has ended at Vidhan Bhavan. The meeting was chaired under the chairmanship of Maharastra CM Devendra Fadnavis. Farmers from across Maharashtra, who embarked on a ‘Long March’ from Nashik on March 6 to press their various demands. Farmers delegation reached Maharashtra Assembly for the meeting with the State Government formed a committee to discuss their demands.

We have accepted most of their demands and have given them a written letter: Maharashtra CM Devendra Fadnavis on Maharashtra Farmers’ agitation pic.twitter.com/PWeXxtCq4K

We’ve had a positive meeting with farmers in which all their demands were discussed. They had around 12-13 demands out of which we’ve accepted some & will be giving them a written draft of it. I think they’re satisfied with our decisions: Girish Mahajan, Maharashtra Minister pic.twitter.com/GPOksRFtuk

Farmers delegation reached #Maharashtra Assembly for the meeting with the State Govt formed committee to discuss their demands. pic.twitter.com/aNME0B9FLA

ANI quoted Rahul Gandhi as saying, “This is not an issue of Maharashtra farmers alone but of farmers all over India.”

This is not an issue of Maharashtra farmers alone but of farmers all over India: Congress President Rahul Gandhi on All India Kisan Sabha protest in #Maharashtra (file pic) pic.twitter.com/wPcdqYSct0

#WATCH: Visuals from Mumbai’s Azad Maidan where members of All India Kisan Sabha have gathered to protest. #Maharashtra pic.twitter.com/3GgN6UMVPB

#Maharashtra: Latest visuals of All India Kisan Sabha protest which has reached Mumbai’s Azad Maidan. The protest will proceed to state assembly later in the day. pic.twitter.com/Dp5hsKU1Rc

Braving scorching heat, they have covered around 180 km on foot in six days. Farmers in the march are demanding a complete loan waiver among other demands. To deal with the situation the Maharashtra state government has decided to appoint a six members committee to look into the farmers demands. The committee will comprise of Maharashtra Minister Chandrakant Patil, Agriculture Minister Pandurang Fundkar, Irrigation Minister Girish Mahajan, Tribal Development Minister Vishnu Savara, state cooperatives minister Subhash Deshmukh and Shiv Sena leader and PWD Minister Eknath Shinde.

The Government has also anticipated cooperation from the participants of the march for a smooth functioning of the traffic on March 12, as it is Monday and exams of the 12th and 10th board are also scheduled for the day. As per information, the total number of the people participating in the march is not more than 7,000. Out of which only 450-500 are farmers, rest are tribals who are participating in the march for their demands. The farmers will protest outside the state Assembly in Mumbai today.

They reached Azad Maidan early today, after camping at KJ Somaiya Ground in Sion area. The CPI(M)-affiliated All India Kisan Sabha, which is spearheading the protest, said it will consider what the government has to offer. CPI(M) leader Ashok Dhawle said over 50,000 people have joined the protest. “We will begin our rally after 11 am today so that students appearing for their Class 10 board exam don’t face any difficulties,” he said. Tribals from Thane district have joined the farmers from Nashik district in the protest. Maharashtra minister Girish Mahajan, who welcomed the march at Mulund in suburban Mumbai yesterday, said the government, which has met earlier demands by farmers, will consider their latest ones.

Farmers also want the implementation of the M S Swaminathan Commission report, which says farmers should be paid one-and-a-half times the cost of production and the Minimum Support Price should be fixed keeping this in mind. While there is no likelihood of all  farmers being allowed to proceed to the Assembly complex from Azad Maidan, a delegation of farmer leaders will be allowed to meet Chief Minister Devendra Fadnavis.