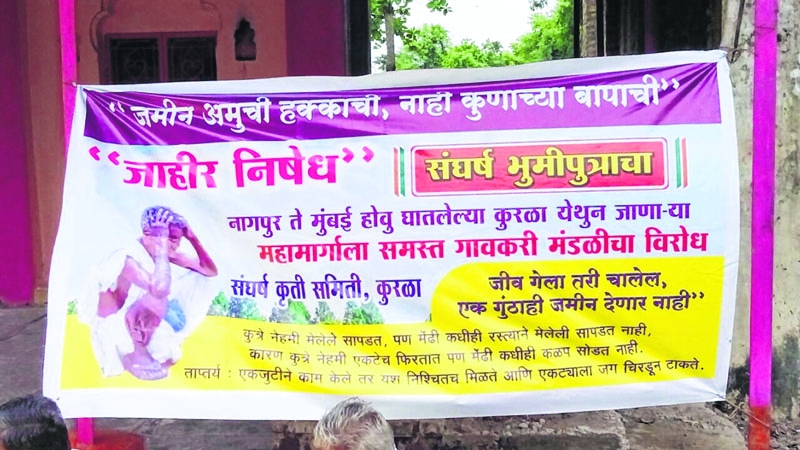 Mumbai: The Nagpur-Mumbai Samruddhi Corridor affected farmers from Aurangabad district have decided not to give land for the project as they are enraged over the double standards of the compensation policy. The state has announced a rate of compensation for the land that will be acquired for Dhule-Solapur highway passing through Aurangabad district which is three times more than the Samruddhi Corridor patch in the same vicinity.

The Aurangabad sub-divisional officer (SDO) of the national highways department had issued a notice to Somnath Ramrao, residence of Fatiyabad in Gangapur tehsil to present himself before him on Friday, September 8 to accept the compensation amount as awarded by the Central government. The notice was issued on August 28, 2017

According to National Highways Act, Somnath Ramrao was awarded Rs. 28,95,176 for his 1.400 Hactare land. (1 hectare = 2.47 acre). The valuation of the land was finalised by the SDO on May 23, this year. Balu Hekade, the project affected farmer and the leader of Sangharsha Samiti against the corridor said that the rate itself proves that government has awarded Rs. 83 lakh per acre rate for Dhule-Solapur National Highway number 211.

Hekade showed the rate card issued by the Maharashtra State Road Development Corporation (MSRDC) to purchase land for the Samruddhi Corridor through negotiation process. He said, “MSRDC has published the rates of land in ten villages in Gangapur tehsil. In Fatiyabad, project-affected farmers will get a rate of Rs 12.7 lakh to Rs 17.48 lakh.”

Raju Desale, coordinator of the Sangharsh Samiti said that 43 cases against the land acquisition have been filed in Bombay High Court and also in Nagpur and Aurangabad bench of Bombay HC. Desale also claimed that MSRDC could acquire not more than two per cent of the total requirement of more than 10,000 hectares land.