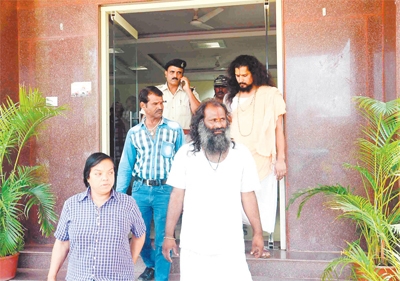 Ujjain : Three miscreants who came on two separate bikes opened fire on Mahant of Nirvani Akhara, Digvijaydas when he was returning from Hanuman Temple located in close vicinity to the Akhara, here at Khak Chowk on Sunday morning.

Mahant Digvijaydas had a narrow escape as his bike fell down and bullets missed him. The Sadhu quickly got up and rushed inside the Akhara to save his life while assailants on failing to shoot him fled the spot. Terrified Sadhu called Jiwajiganj CSP, Milkit Singh Brar and informed him about the incident. Jiwajiganj police rushed to the spot and quickly cordoned off the area. During the search operation police nabbed one of the assailants Ghanshyam alias Nadu Bairagi from Khak Chowk area within hours after the attack.

Digvijaydas informed Jiwajiganj police and alleged that Nandu Bairagi along with his brother Pankaj alias Tinku Bairagi and Abhishek Bairagi had attacked him over a land dispute. Police took Digvijaydas to police control room and showed him CCTV footage of the area at the time of attack where he identified the trio. Mahant Digvijaydas while talking to Free Press alleged that his relative Teena Bairagi had planned the attack and hired these assailants to kill him over the property dispute which is pending in the local court.

However, primary interrogation revealed that Digvijay Das was attacked over the disputed land of the Aashram which is located in front of Uttaramukhi Hanuman Temple and the trio wanted to grab the land illegally. Jiwajiganj police on the complaint of Mahant Digvijaydas registered a case against Nandu, Abhishek and Pankaj under section 307 of IPC and police launched a manhunt to net Abhishek and Pankaj.