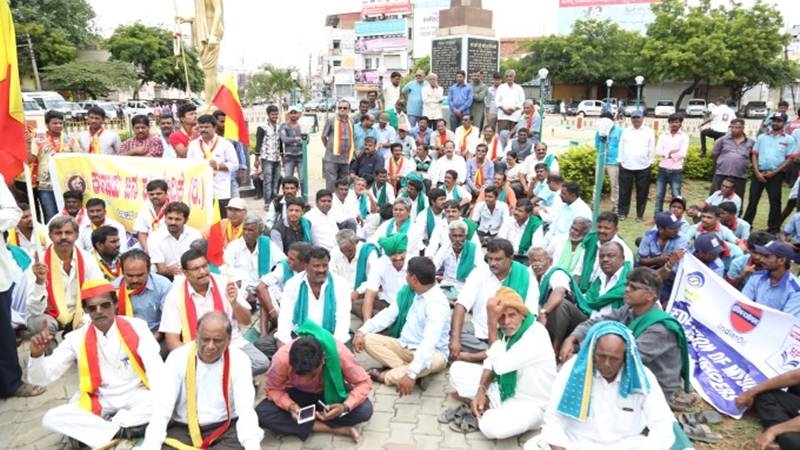 Bengaluru: Normal life was hit in five north Karnataka districts today following a bandh called by farmer groups over getting Mahadayi river water from Goa to meet the drinking water needs of drought-prone areas of the region.

Shops and establishments downed shutters, schools and colleges were closed and buses and other means of transport were off the roads in the districts of Gadag, Dharwad, Belagavi, Haveri and Bagalkot across the Malaprabha river basin and its neighbouring areas, officials said.

The dawn-to-dusk bandh was called by ‘Mahadayi Kalasa Banduri Nala Horata Samanvaya Samiti’, an umbrella organisation spearheading the agitation on the issue. Pro-Kannada organisations, including the Kannada film industry, backed the bandh.

Stray incidents of stone-pelting of trucks at Navalagunda, forced closure of shops and burning of tyres by the bandh supporters were reported from some places, officials said. A protest rally was held at Hubballi’s Chennamma circle.

Terming the bandh as a “warning bell” to the state and  central governments, the samiti leaders had yesterday demanded a solution at the earliest, even as they hit out at political parties for playing politics on the issue.

Protests also echoed miles away in the state capital Bengaluru, where Mahadayi protagonists and the BJP have launched separate agitations. The protests caused inconvenience to office goers as these caused traffic jam in the city’s central business district.

Groups of farmers, including women from north Karnataka districts, protesting near the BJP’s state office here since Saturday, staged a march to the Raj Bhavan and submitted a petition.

They are demanding that BJP state chief B S Yeddyurappa resolve the issue as promised by him last month.

Yeddyurappa, who had promised he would get a written agreement signed by December 15 for resolving the issue between the two states, yesterday tried to convince the farmers to end their stir citing the letter written to him by Goa Chief Minister Manohar Parrikar but failed.

The protesters have accused Yeddyurappa of not keeping his promise, and called him a “betrayer”.

Parrikar, in a letter to Yeddyurappa on December 21, had said that in principle, Goa would not oppose the release of “reasonable and justified” quantum of water meant for drinking purposes to Karnataka. Parrikar’s letter followed a meeting BJP chief Amit Shah had with the Goa chief minister and party leaders from Karnataka.

The leaders of agitating farmer groups also called on the Karnataka chief Electoral Officer (CEO) and urged him not to hold Assembly elections in the state, due early next year, till an amicable solution to the Mahadayi water dispute is found. They staged a demonstration at the Freedom Park here demanding release of water.

BJP leaders, including former minister Ashoka and Lok Sabha member Shobha Karandlaje, tried to lay siege to the Congress’s state office here, demanding that the party’s leadership do its bit to convince its Goa unit to try and find an amicable solution to the dispute.

The BJP leaders were detained by the police for staging a protest without permission. Barricades were erected at different places and traffic was diverted to stop BJP workers from gathering at the venue.

“We all know the agitators sitting in front of our (BJP) office. Congressmen posing as farmer leaders are holding the sit-in demonstration,” Ashok said.

He alleged that instead of finding a solution to the water sharing issue, Chief Minister Siddaramaiah had “stooped low” to send his partymen to stage a demonstration outside the BJP office.

The Mahadayi (called Mandovi in Goa) originates in Karnataka and flows to Goa and Maharashtra. The three states are locked in a protracted dispute over sharing its water. The Siddaramaiah government in Karnataka has been accusing the BJP’s state unit of not doing enough to help bring water to North Karnataka, one of the most parched regions in the country that is the epicentre of the agitation.

It is being undertaken to improve drinking water supply to the twin cities of Hubballi-Dharwad and districts of Belagavi and Gadag.