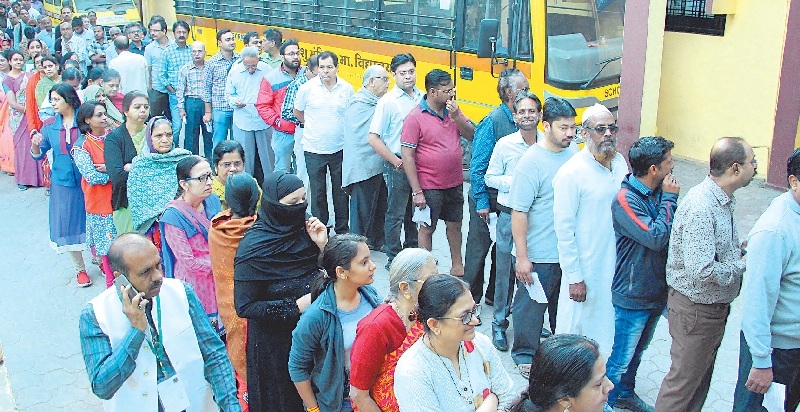 Indore: The voters of the cleanest city of the country, showed substantial zeal in participation of the festival of democracy during the elections for 9 assembly constituencies of the district on Wednesday. The polling percentage in district jumped whopping by 5.58% to 76.19%. in 2013 election this figure was 70.61%.

The activities carried out under Systematic Voters Education and Electoral Practices (SVEEP) by the district election officer Nishant Warwade and nodal officer of elections Nidhi Nivedita and the zeal of the voters of the district contributed to the results. The polling percentage received in late night of Wednesday shows that voters of the Indore-5 assembly Constituency, which is also the biggest constituency of the state, come out with enthusiasm in exercising their franchise. The highest polling percentage registered rose there by 14.85% to 81% from 66.85% recorded in 2013 elections.

The second highest polling turnout recorded in Indore- 2, Indore-3 and Indore-4, where the polling percentage jumped by more than 6% respectively. Depalpur and Mhow registered rise in polling by 4% each. While Indore-1 by 3.60% and Rau and Sanwer by 2.71% each. However, in terms of the total polling Depalpur remained front runner, where 84% polling was recorded. Actually the polling percentage history of this rural constituency clearly shows that it remained leader in this contest in the district. The voters of the Indore-5 assembly seat also sprang up an surprise, where voting percentage jumped by an unprecedented 14% from 66.79% of 2013 to 81% in the poll held on Wednesday.

Looking the tally of the poll percentage, the voters the enthusiasm of the urban voters have beaten the zeal of rural voters as all the polling percentage in urban seats from Indore-1 to 5 have raised from 14% to 6 and 3%,while at rural seats like Depalpur, Mhow, Rau and Sanwer the polling percentage stands in range of 2% to 4%. In the backdrop of the unprecedented turnout the voters might by waiting the outcome of their vote, Which would be declared on December 11. 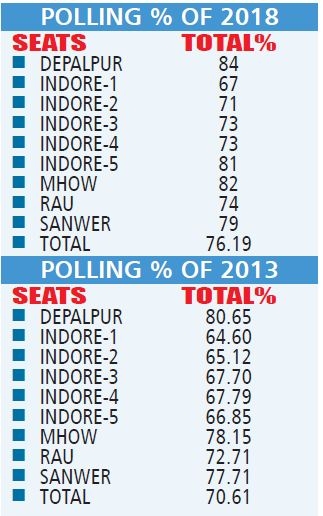