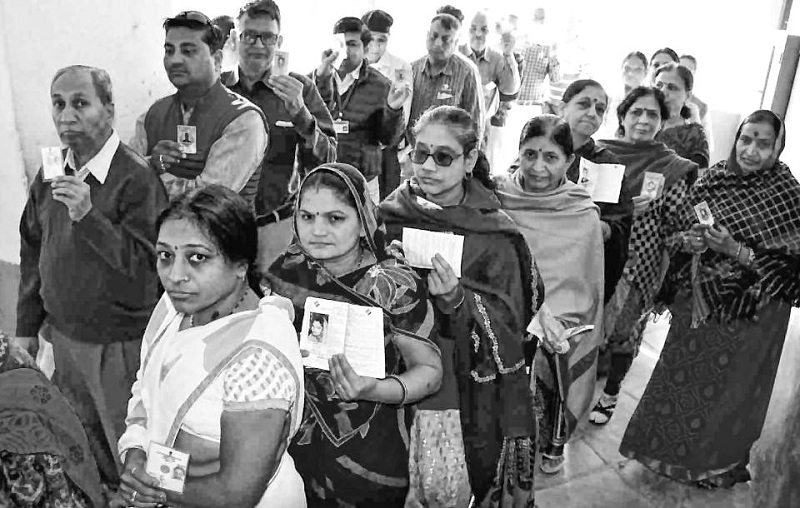 According to details, there are 14,26,230 voters in the district of which Ujjain South constituency has 2,43,585 voters while Ujjain North has 2,17,872 voters. Along with voters of the city, candidates also exercised their franchise along with their family members after visiting temples. Youths, elderly, differentlyabled men and women participated in the voting for the new government. Padmshri Dr Keshav Rao Sadashiv Shastri Musalgaonkar (93) cast his vote in Model School-located polling booth while 91-year-old Kamalakar Deshpande, who is a paralytic, also cast his vote.

He said casting vote is the moral duty of every citizen. Even a woman, who delivered a baby girl, came to a polling booth by an ambulance to cast her vote. In another incident, a girl Gyapti Garg cast her vote before tying the knot in the ‘mandap’.

Complaints of malfunctioning of EVMVVPAT machines reached from at least one dozen polling stations across the district.At some polling booths, EVMs got out of order suddenly due to snag which created problems to the polling team. At Damdama located polling booth, voting started one hour late as EVMs was not properly functioning during mock drive. Similarly, voting was interrupted for sometime at Lakshmi Nagar, Jamatkhana, Audichya Brahmin Samaj Dharmshala booths and also booths at number 215 of Ujjain North constituency, Lakshmi Nagar Beema Hospital and Mangrola polling booths due to snag in EVMs and VVPAT machines.

Meanwhile, chaos prevailed for one hour at polling booth number 128 under Ujjain North constituency located Tayyabi School, Kamari Marg as EVM-VVPAT machine developed snag at 3 pm. A technical team of the election office reached the polling station and polling started again at 3.30 pm. Till then 292 of 521 voters had exercised their franchise.