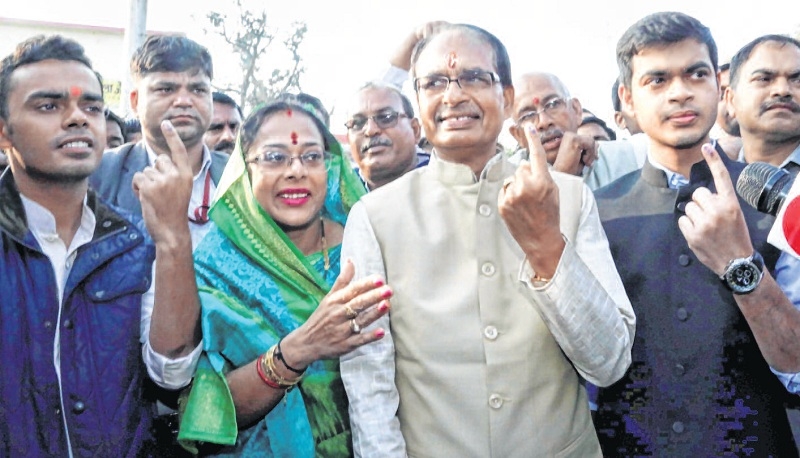 Hoshangabad: Polling remained peaceful in four assembly constituencies – Sohagpur, Seoni Malwa, Pipria and Hoshangabad on Wednesday. Sector magistrates along with police personnel continued to patrol different polling stations. Besides, collector Priyanka Das and SP Arvind Saxena kept vigil. Polling began at 8am and people cast their votes with enthusiasm. The polling picked up slowly as in the morning only 4% of voting was recorded. Vehicles were arranged to take the elderly and specially-abled voters from home to polling booths and drop them back. CM Shivraj Singh Chouhan and his family members cast their votes in Budhni.

Besides Chief Minister, both Das and Saxena cast their votes. Commissioner of Narmadapuram division Umakant Umrao reached a polling booth on a bicycle and cast his vote.Similarly, BJP candidate Sitasaran Sharma and Congress’s Sartaj Singh cast their votes in Hoshangabad and Itarsi, respectively.

Chairman of Nagar Palika Akhilesh Khandelwal cast his vote along with family members. The elderly people including a 100-year-old woman reached polling booths with the help vehicles provided by the district administration. Congress corporator Vivek Shrivastava carried some elderly and specially-abled people to the police stations to help them cast their votes.