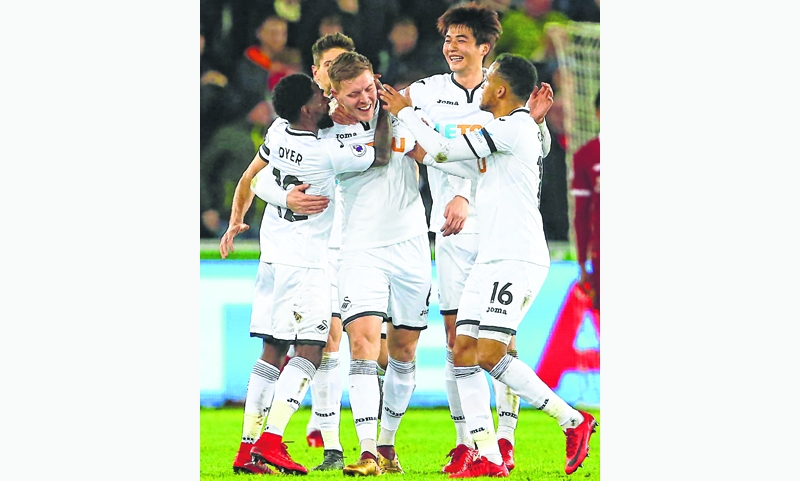 Swansea City's English defender Alfie Mawson (C) celebrates with teammates after scoring the opening goal of the English Premier League football match between Swansea City and Liverpool at The Liberty Stadium in Swansea, south Wales on January 22, 2018. / AFP PHOTO / Geoff CADDICK / RESTRICTED TO EDITORIAL USE. No use with unauthorized audio, video, data, fixture lists, club/league logos or 'live' services. Online in-match use limited to 75 images, no video emulation. No use in betting, games or single club/league/player publications. / |

Jurgen Klopp’s side, with £75 million centre-back Virgil van Dijk making his away debut, were seeking to extend their unbeaten run to 19 matches and draw level on points with third-placed Chelsea.

But fresh from dramatically ending Manchester City’s unbeaten run, the Reds ran into a determined Swansea side desperate to close the gap on the strugglers above them.   Despite laying siege to the Swansea goal, Klopp’s side were unable to find the net and Roberto Firmino struck the post with a header in the dying seconds.

Swansea took the lead against the run of play just before half-time when Mawson swept the ball in from a corner after Van Dijk failed to head clear.

It was exactly the kind of soft goal that Liverpool manager Klopp thought he had found the solution to with the purchase of the towering Dutchman.

In contrast to their clinical performance against City at Anfield, Liverpool were wasteful and guilty of missing a number of first-half chances. Sadio Mane and leading goalscorer Mo Salah both volleyed wide before the break and Van Dijk flashed a header just wide of the post.

Liverpool kept pressing in the second half, but either found their strikers lacking or else discovered Lukasz Fabianski in inspired form in the Swansea goal. He first denied Salah when he tipped over the Egyptian’s free kick with an acrobatic save on the hour mark. Then, Fabianski dived low to deny Liverpool substitute Danny Ings late on.

The goal came was a throwback to the type of problems Liverpool have suffered under Klopp. Liverpool dealt with one corner, but conceded a second and from that kick the Swans took their unlikely lead through Mawson, leaving Klopp looking aghast.

It was not just Klopp who was rattled as Liverpool pair Andrew Robertson and Joel Matip were shown yellow cards in quick succession. Robertson was booked for hacking at Ayew as he lay over the ball after a foul and then Matip went for scything down Lucas.

Salah then put the ball on a plate for Mane with the last move of the half, but the striker volleyed wide from a tight angle. Liverpool continued to surge forward after the break, but Swansea showed their new-found discipline under Carvalhal.

A great saving tackle by Kyle Naughton denied Robertson, before the Liverpool full-back cut a beautifully inviting ball into the box for no takers. On the hour mark, Salah struck a sweet free-kick from the edge of the box that looked to be dipping under the Swansea bar. But Pole Fabianski was equal to it as he tipped the ball over at full stretch.