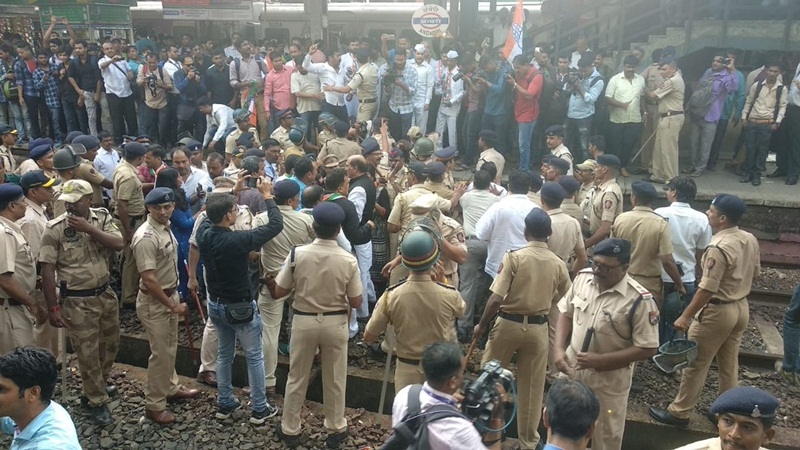 Mumbai: Mumbaikars did not have a tough commute during the Bharat Bandh, as public transport services were hardly affected on Monday. Local train services were delayed by 15 minutes, according to railway officials, which, regular commuters can vouch for, is routine. Trains were halted briefly and petrol pumps were forced shut in parts of Mumbai on Monday, even as public vehicles, including buses, autorickshaws and taxis, plied normally. “Nearly 90-95 per cent autos, taxis and BEST buses were on the roads, so citizens were not really inconvenienced,” said a BEST official.

The chief public relations officer (CPRO) Sunil Udasi said everyday 80 lakh commuters use both Western and Central railways. “If anyone calls for rail block, the rail police staff will be ready to take them out of the tracks and keep the system running. We had already asked the railway police to strengthen their presence at stations to prevent any inconvenience,” said Udasi. Ravinder Bhakar, CPRO of the WR said train services were not affected, “as we had made adequate provisions. While entering Platform No 3 of Andheri station, protesters stopped the local around 9.44 am. But within ten minutes, all protesters were removed from tracks and services were resumed immediately,” added Bhakar.

Commuters travelling on suburban sections said trains were running smoothly on Monday, as compared to other days. “Earlier also, there have been bandhs and we faced problems as protesters had blocked the services. But this time, I reached office on time,” said Bhoovid Mule, a commuter. However, metro officials said services on the 11.04 km Versova-Andheri-Ghatkopar Metro line were affected for some time on Monday, around 9.30 am after a group of Maharashtra Navnirman Sena (MNS) party workers tried to stop the train at the D N Nagar metro station. “The protesters also went on the metro tracks, shouting slogans and holding flags. Security personnel immediately jumped into action and moved protesters away, so that services were not blocked,” said the official.

A spokesperson of Mumbai Metro One Private Limited (MMOPL) said, “At 9.45 am, metro services were disrupted for a short period on account of protest by political parties. At 9.59 am, the protesters were dispersed by security personnel and police, and the issue was resolved. Normal services were restored at 10.01 am.” Hanumant Gophane, Public Relations Officer (PRO) of the Brihanmumbai Electricity Supply and Transport (BEST) Undertaking said around 14 buses were vandalised by protesters as they pelted stones on buses but no passengers were injured in the incident.