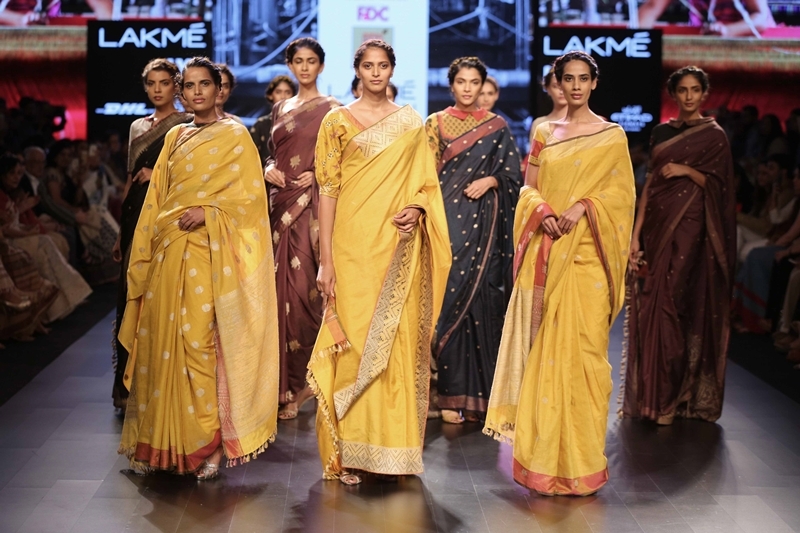 Fashion names that transcend the North East have always been somewhat of a mystery. From Sherdukpen shawls to Apatani jackets there is much that we are unaware of. Hence, The Lakmé Fashion Week Winter/Festive ’16 has taken up #MadeInAssam initiative in collaboration with the Northeast Fashion and Design Council, where they exhibit the myriad appeal of their textiles, and, making them more wearable with an aesthetic touch. With a diaspora that extends to roughly somewhat like 400 tribes, each having its unique way of weaving and distinct pattern to identify with, the north east is getting the much needed spotlight that it deserves.

In order to fill in the absence of North Eastern offerings and bring Assam’s couture tradition to the forefront, Pranami Kalita started her label ‘Pariah’ to blend the luxurious silks like Paat, Eri and Muga with her contemporary touch.“As a brand I have always tried to do something and bridge the gap and bring the beautiful textures of Assam out in the mainstream, and a platform like this is what makes it possible. The fabrics of Assam are so exquisite but at the same time I have tried to blend it in the more contemporary youth. We are trying to help weavers and empower our women weavers with this #MadeInAssam initiative and in my own way my brand is trying to put forth the fashionable angle to it and Lakmé seems the right platform for that, thus giving handloom a chance.” 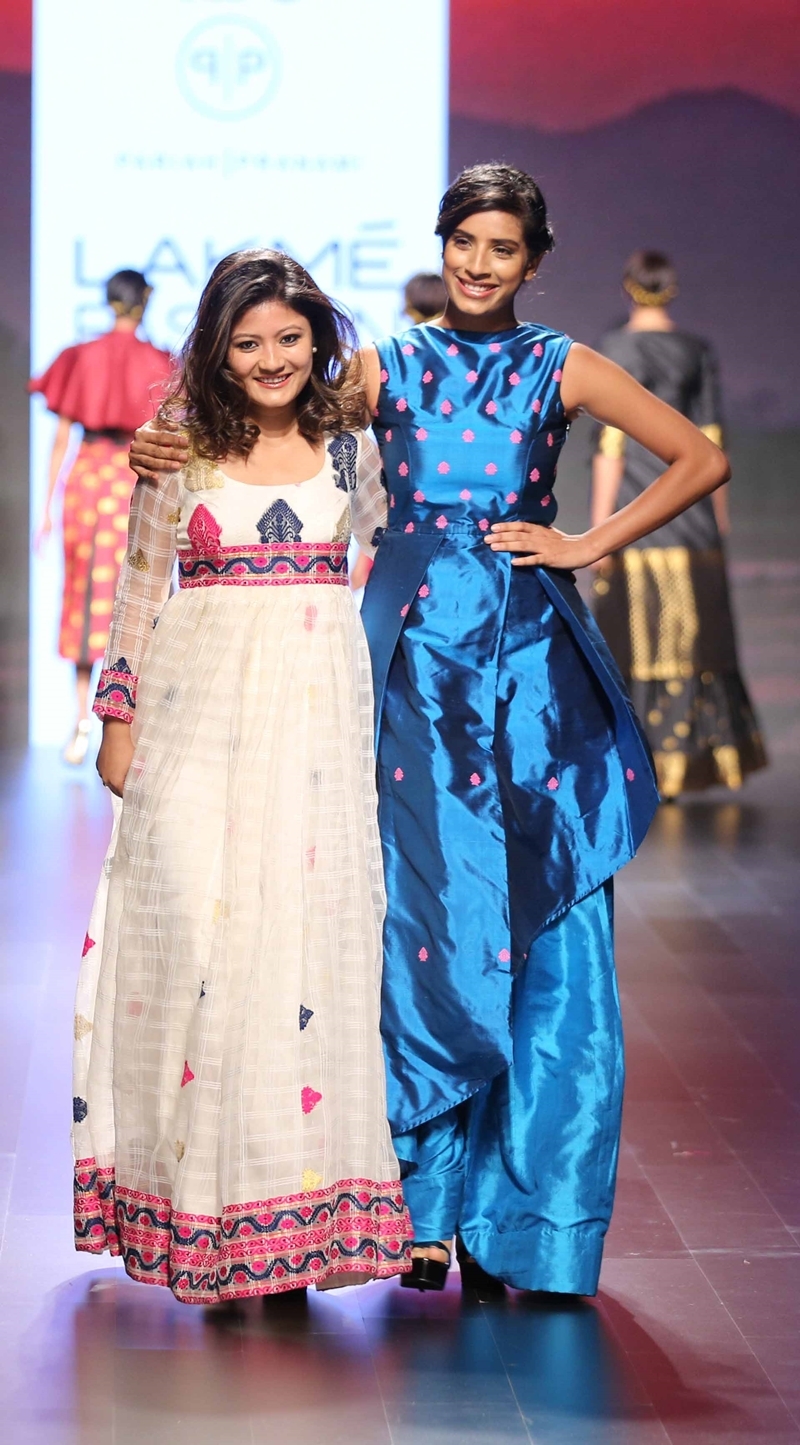 “Earlier it was like if you didn’t know how to weave you were not even eligible to get married. It was so necessary that I don’t even remember how I learned to weave”- Anuradha Pegu

On the crisis faced by weavers of North East, Kalita elaborates, “Because of lack of demand, we lost out on a lot of weavers who came to cities and did odd jobs such as maids, and these are all artisans at the end of the day. But with some limelight to Assam right now, I am hoping it is just a stepping stone to a long journey which will not just create awareness but also the demand in the market, thus creating a livelihood for these weavers. The way I see it, the gates have just opened and there’s so much more to come out.”

Aagor by ANTS craft, an NGO that helps women weavers of strife torn areas by providing them weaving work collaborated with designer Aditi Holani Chandak who envisioned aesthetic couture for these yards. The collection had Sarah Jane Dias as the showstopper says, “I have been to Assam and I absolutely love it, but have I been back to do anything for it? No. But the thought that I am wearing something that was created over hours of hard work for women who can’t actually be here and speak for themselves, that for me is a true honour.” 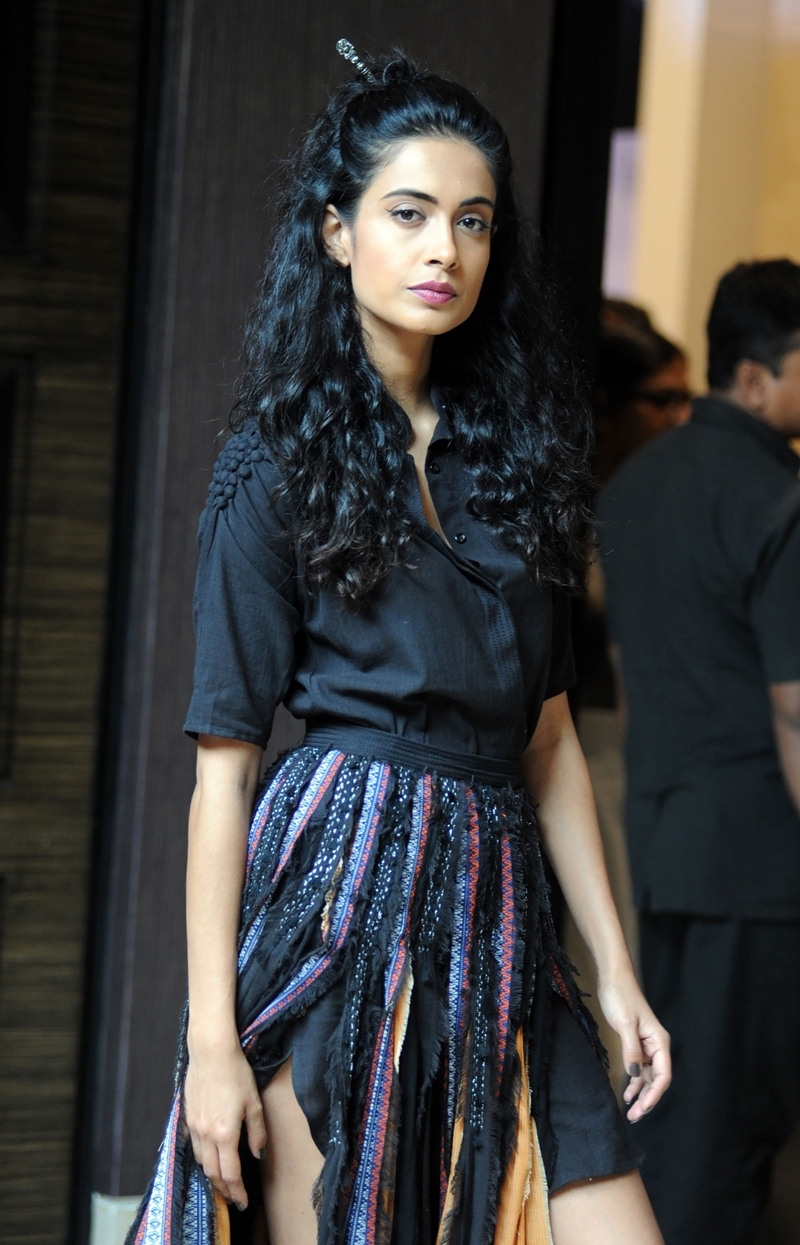 National award winning woman weaver Anuradha Pegu who introduced her label Naturally Anuradha with a stunning show of her rich drapes says, “All my designs are revival in nature, which have been worn since 100 years and were inspired from museums of Assam. My creations are 100 per cent natural and are dyed with turmeric, lac, indigo, harda, and iron, also the thread used is hand spun, and is made of pure silk. The turmeric in specific is different than what we usually use. The one used by our artisans is from Meghalaya since it gives a richer colour.” 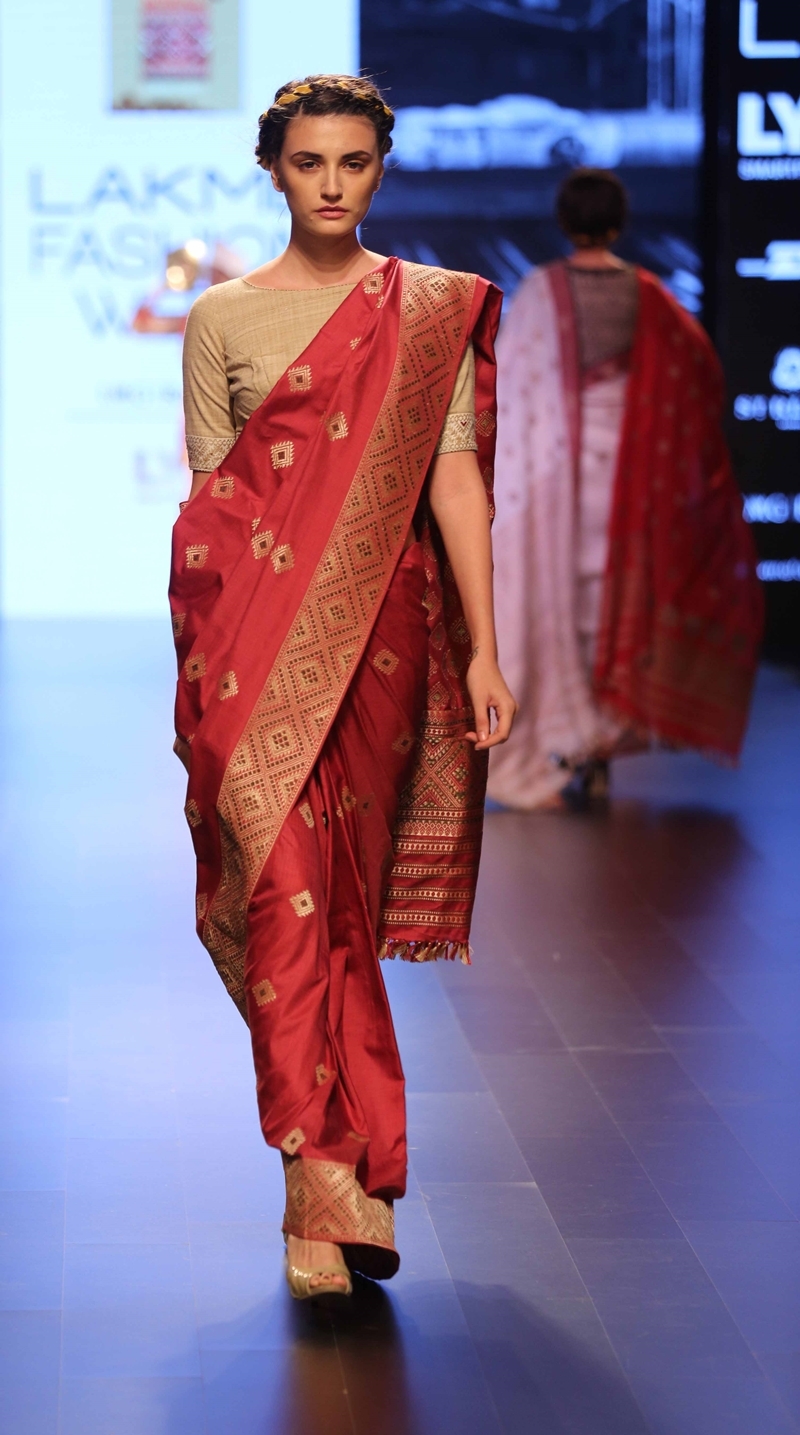 Unlike many other regions in India the north-east is believed to have mostly female weavers. It is said that of the tribes have a taboo which prohibits weaving by a man who is believed, would lose his virility were he to follow this effeminate craft. With more than 25 years of experience, Anuradha highlights how weaving is an important aspect in her work. “Earlier it was like if you didn’t know how to weave you were not even eligible to get married. It was so necessary that I don’t even remember how I learned to weave. At that time I created only for myself and not commercially. But people started liking my work and started this as a business 15 years ago. Assam is full of rich textiles and with many tribes, each tribe has a different textile but sadly people don’t know much about it which is why we are taking an initiative to bring forth the work of these tribes of North East.”

This year The Ministry of Textiles introduced the North East Textile Promotion Scheme (NERTPS) early this year, which is to help with textile production, improvement in labour productivity and access to market. They have said to have undertaken a Rs 1,038 crore budget to develop and modernise the sector by providing regional solutions. “We haven’t received any help from the government; I feel there is nothing much done. I’m sure other designers would agree that it is only our hard work which helps,” says Anuradha.

Raktim Roy, Head of Events and Programs of Colours of Northeast, Mumbai has worked closely with many designers from North East says, “LFW is one of the biggest platform to showcase the talents in front of the export houses, buyers, fashion experts, media, and critics. I personally know many designers who are extremely talented and keen to participate in LFW as they feel it might get the mileage which they are seeking. But at the same time it is not possible as a huge cost is to be incurred by the participant to be in the maxim city with all the costumes and other requirements.”

Yana Ngoba a well known designer of Arunachal Pradesh who also specializes in Indian ornamental designs displayed her installation, where she narrated a story of farm-to-fashion with weaves from her home state. She says, “Weavers of North East have no idea what are fashion shows. For people here who sit for a show and give a chunk of their admiration as if some sort of entertainment, but for our weavers it is the product of their daily hard work and a source of livelihood.”

With a heritage that delves into a deeply rooted culture, and, a legacy that extends generations, we are sure to note that the region may go in and out of fashion, but, never out of style. So, all we prod you to do is invest a little into these pieces of love, labour, and heritage, and, we are sure you will not regret!