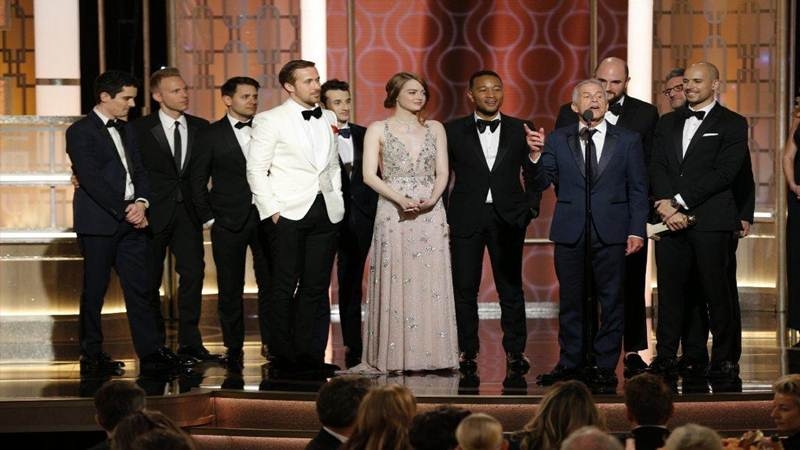 Los Angeles: “La La Land”, a nostalgic ode to classic Hollywood romances, swept the Golden Globes by winning in all the seven categories it was nominated in, including the top award of best musical or comedy at the ceremony, which saw stars take potshots at President-elect Donald Trump.

Gosling, in an heartfelt speech, thanked his partner, Eva Mendes, for supporting him during the film. “While I was singing and dancing and playing piano and having one of the best experiences I have ever had on a film, my lady was raising our daughter, pregnant with our second and trying to help her brother who is fighting cancer. If Eva had not taken all that on so I could have this experience, there would be surely someone else standing here today,” he said.

An emotional Stone   thanked her mother, father and brother for being supportive throughout. “This is a film for dreamers. Hope and creativity are two of the most important things in the world and that’s what this movie is about,” Stone said, adding she shares this award with everyone who “had a door slammed at their face”.

“La La Land” also took the best original score award and best original song for a motion picture for ‘City of Stars’. However, in a surprise move the other big award of the night went to “Moonlight”, which pipped Dev Patel-starrer “Lion”, “Manchester By The Sea”, “Hacksaw Rridge” and “Hell or High Water”.

Isabelle Huppert pulled off an upset win in the best actress in a motion picture – drama for “Elle” over Amy Adams, Natalie Portman, Ruth Negga and Jessica Chastain. Her French movie “Elle” was named the best foreign film.

Actor Casey Affleck won the best actor in a motion picture – drama for his moving performance in “Manchester By the Sea”. In the best supporting actor and actress categories the trophies went to Aaron Taylor-Johnson of “Nocturnal Animals”, who beat nominees like British-Indian Dev Patel “Lion”, Mahershala Ali for “Moonlight”, Jeff Bridges for “Hell or High Water” and Simon Helberg for “Florence Foster Jenkins”.

She said the “performance” that stood out this year did not belong to an actor but to Trump when he publicly mocked a disabled reporter. “There was nothing good about it, but it did its job. It kind of broke my heart when I saw it, and I still can’t get it out my head because it wasn’t in a movie, it was in real life.

“That instinct to humiliate when it’s modeled by someone in a public platform, it filters down into everyone’s life because it gives permission for others to do the same.”

Best animated film award went to “Zootopia”. Globes host Jimmy Fallon, who has been criticised for being too soft on Trump, started his opening monologue by comparing the President-elect with villainous King Joffrey of “Game of Thrones”.

“The film ‘Florence Foster Jenkins’ is nominated. The character has been dubbed the world’s worst opera singer and even she turned down performing at Donald Trump’s inauguration. It’s tough to book,” he said.

Actor Hugh Laurie, who won the best supporting actor role in a limited TV series for “The Night Manager”, said he was collecting the “last ever Golden Globes”. “I don’t mean to be gloomy. It’s just it has ‘Hollywood’, ‘foreign’ and ‘press’ in the title. To some Republicans even the word ‘association’ is slightly sketchy,” he said, adding, I accept this award on behalf of psychopathic billionaires everywhere.”

Actor Tom Hiddleston, who spent most of 2016 being on the pages of gossip columns for his romance and subsequent break-up from Taylor Swift, won the best actor for “The Night Manager” while co-star Olivia Colman was named the best supporting actress.

“Well this is lovely thank you,” Hiddleston said. Netflix show “The Crown”, about the present Queen Elizabeth, was named best drama and its leading actress Claire Foy, who plays Elizabeth, won best actress in a drama. The historical show beat out category favourites such as “Stranger Things”, “Westworld”, “This Is Us” and “Game of Thrones.”

“Atlanta”, about an aspiring rapper and his manager cousin, was named the best comedy and its star, Donald Glover, won best actor while Tracee Ellis Ross won best actress in a TV series musical or comedy “Black-ish”.

“The People vs O J Simpson” was named best mini-series and its star Sarah Paulson won for her portrayal of the prosecutor Marcia Clark in that show. Billy Bob Thornton, won for his role in “Goliath”.

Fallon, in a first, opened the show with an elaborate song-and-dance parody of “La La Land” where he roped in major celebrity cameos.