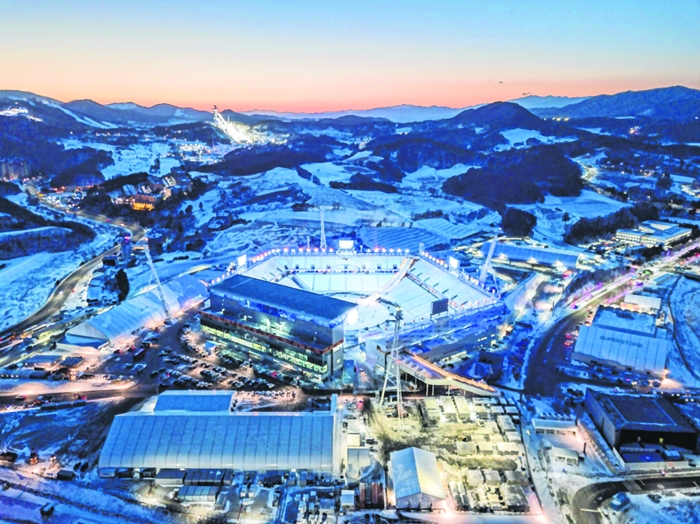 TOPSHOT - A general view shows the venue for the opening and closing ceremonies of the 2018 Pyeongchang winter Olympics, in Pyeongchang on January 23, 2018. / AFP PHOTO / Ed JONES |

Seoul : A team of South Korean officials travelled to North Korea on Tuesday to check logistics for joint events ahead of next month’s Winter Olympics in the South, as the rivals exchanged rare visits to each other amid signs of warming ties.

The head of the North’s popular girl band triggered a media frenzy during her two-day visit to South Korea this week to check potential venues for North Korean artistic performances during the Olympics, and another delegation from the North is coming this week to see accommodation facilities and the Olympic main stadium.

The Koreas are pressing ahead with a flurry of reconciliation efforts after North Korean leader Kim Jong Un abruptly expressed his wiliness to send an Olympic delegation.

While some see Kim’s outreach as a ploy to weaken U.S.- led international pressure and sanctions, Seoul wants better inter-Korean ties and sees improved ties as a path toward talks to help ease the North Korean nuclear standoff.

South Korea’s presidential office called for national unity for the success of the first Winter Olympics on South Korean soil and criticized conservatives who have said the government is making too many concessions to North Korea to help it steal the show at the Games.

“We don’t understand why they label the Games as the ‘Pyongyang Olympics,’” spokesman Park Su-hyun said in a televised statement.

“The Pyeongchang Olympics is the Pyonghwa (peace) Olympics.”

Under a deal approved by the International Olympic Committee, the Koreas will field its first unified Olympic team, in women’s hockey, and have their athletes parade together under a single flag during the Feb. 9 opening ceremony.

The two Koreas also reached their own agreements to hold joint cultural events at the North’s Diamond Mountain and have their non-Olympic skiers practice together at the North’s Masik ski resort before the Pyeongchang Games.

The South Korean team is to visit those places in North Korea from Tuesday to Thursday.

But in a reminder of their bitter relations, North Korea had a harsh rhetorical response to a protest in Seoul in which South Korean conservatives burned Kim’s photo and a North Korean flag when the Moranbong Band leader, Hyon Song Wol, passed by them during her visit Monday.

“They committed unpardonable atrocities … and defaming the dignity of the supreme leadership,” Ri Myong, councillor of the Secretariat of the Central Committee of the Democratic Front for the Reunification of Korea, said in the statement.

“If these traitors and psychopaths defaming the dignified Korean nation are allowed to go scot-free, the national reconciliation, unity and the building of a reunified powerful country will be delayed so much,” he said.