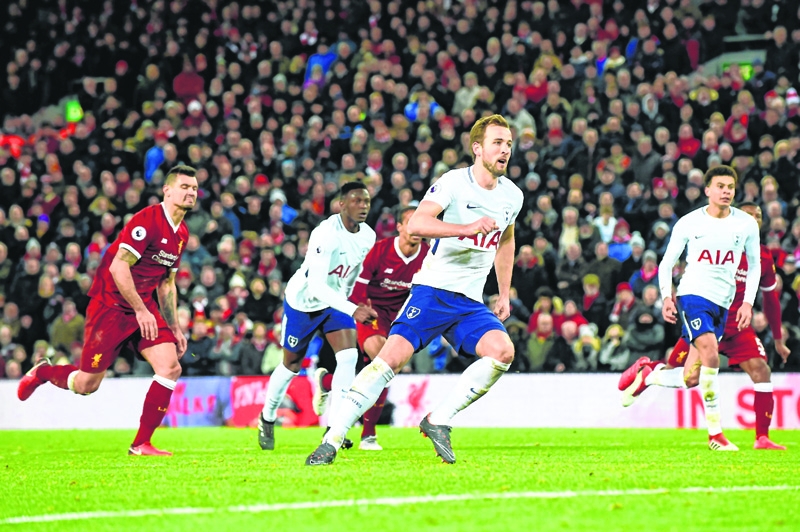 Liverpool : Jurgen Klopp was left fuming at referee Jon Moss after Harry Kane’s 100th Premier League goal from the penalty spot deep into stoppage time snatched a controversial point for Tottenham Hotspur from a dramatic finale in a 2-2 draw at Liverpool on Sunday night.

Mohamed Salah’s stunning 91st-minute solo run and finish for his second goal of the game sparked wild celebrations from his manager Klopp and looked to have handed Liverpool a vital victory in the battle for a place in the top four.

But Kane, who had already seen a penalty saved by Loris Karius five minutes from time, converted second time round from the spot with virtually the last kick of the game after Liverpool’s £75 million January recruit Virgil van Dijk was adjudged to have brought down Erik Lamela.

A point leaves third-placed Liverpool still two points ahead of Tottenham, who remain in fifth.

Kane’s 21st league goal of the season also edged him one back ahead of Salah in the race to be the Premier League’s top scorer, but Liverpool were left furious at Moss and his assistants.

It was Moss’ assistant who awarded Kane’s second spot- kick after also having a role to play in the first by not flagging the England striker offside before he was brought down by Karius.

“In the first penalty it is one of the clearest offside situations,” added Klopp.

“When the ball left the foot of the Tottenham player, Kane is offside. My defence put him offside, it is good defending.”

By contrast, Tottenham manager Mauricio Pochettino congratulated the officials for having the bravery to award two spot-kicks to the visitors at Anfield.

“I congratulate them to show the character they showed,” explained the Argentine as to why he had approached Moss at full-time. When they are right and show character I think it is right to congratulate them because it is a very difficult job for them.”

The majority of a 53,000 crowd had barely taken their seats before being brought to their feet inside three minutes when Eric Dier’s misplaced pass freed Salah in behind the Spurs defence to slot confidently past Hugo Lloris.

Tottenham have now won just one of 19 visits to Liverpool, Manchester City, Manchester United, Chelsea and Arsenal in Pochettino’s four-year reign in charge.

But they did salvage the point their second-half display at least deserved thanks in no small part to a stunning strike from substitute Victor Wanyama with his first touch.

The Kenyan had only been on the pitch a minute when he latched onto a punch from Karius to crash an unstoppable drive into the top corner.

Spurs then thought they had the chance to win the game was Kane was brought down by Karius and Moss pointed to the spot.

After a long discussion with one of his assistants, Moss stood by his original decision despite Kane being in an offside position before Dejan Lovren deflected Dele Alli’s pass into his path.

However, justice was done for Liverpool when Karius repelled Kane’s poorly hit penalty. Moments later Anfield was in raptures as Salah escaped from three Spurs challenges before dinking high beyond Lloris to send Klopp racing down the touchline in celebration.

That joy was short-lived, though, as Spurs were awarded a second penalty, this time by Moss’s assistant for Van Dijk’s late swipe at Lamela.