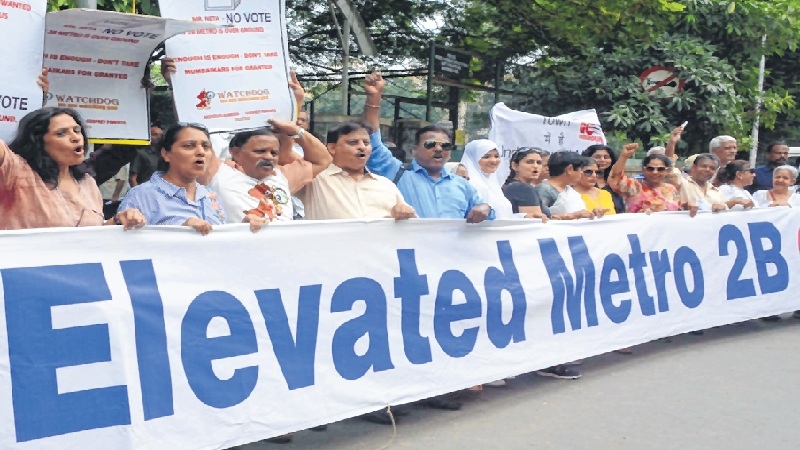 Mumbai: Khar residents on Swami Vivekanand Road have demanded that the Mumbai Metro Line 2B elevated corridor be constructed underground. The residents, along with a few Bollywood celebrities, held a protest on Friday over the proposed project, an elevated corridor. The protesters warned if their demand for an underground corridor was not fulfilled, in the upcoming 2019 general election, they would vote NOTA (None Of The Above).

Sandra Shroff, chairperson of the Khar Residents’ Association, said, “At present, Swami Vivekanand road is the only road connecting Bandra and Borivli. If the proposed overground Metro line 2B work starts, then the existing narrow road will exacerbate traffic congestion, inconveniencing us further.”

Zafar Jhaveri, another protester said, “We want the metro to be underground as a line above will create bottlenecks on the roads, especially where the metro stations are. Moreover, the station structures will also eat into the open space of the surrounding buildings where the elevated corridor will begin. It will affect the safety of the building, as the metro line will be closer.”

Activist Anandini Thakoor said she has been trying to meet Chief Minister Devendra Fadnavis for the last three years, to raise the issue. “We have a plan designed by a private project architect for the underground elevated corridor. This will help us put across our idea to the Chief Minister and the authorities, showing how the underground metro will prove more beneficial than the overground one,” Thakoor said.

The Metro 2B line, from DN Nagar to Mandale at Mankhurd, is completely overground. The elevated corridor has 22 stations and is 23.643km long. It will provide connectivity between Western Express Highway, Eastern Express Highway, Western Railway, Central Railway, Mono Rail, Metro Line 1(Ghatkopar to Versova) and Metro Line 2A (Dahisar to D N Nagar), Metro Line 4 (Wadala to Kasarvadavali) & Metro Line 3 (Colaba to SEEPZ) in progress. The project has been planned to connect the eastern and western suburbs. It is expected that the line will reduce the travel time between 50 and 75 per cent.