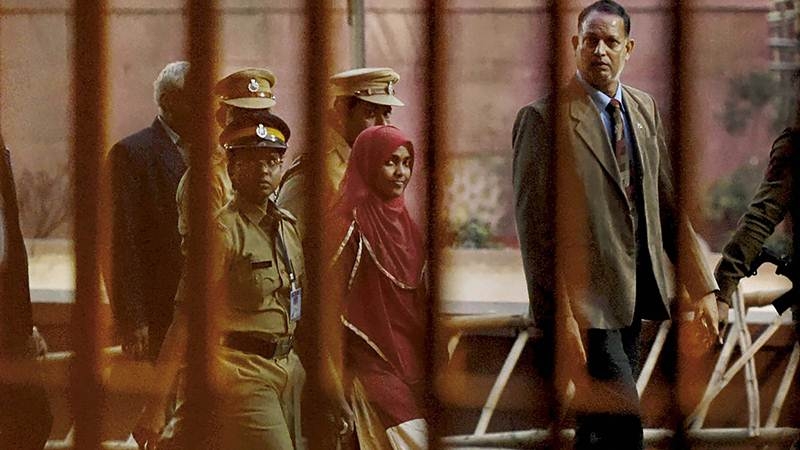 Hadiya, a 24-year-old Hindu woman from Kerala who converted to Islam. PTI Photo by Manvender Vashist |

Eighteen is the legal age in the country for an individual to make all the legal choices and as a free democratic country, it is understood that every individual irrespective of their caste, creed, and sex is free to make the choices in their life. But in the run-up to the events that have unfolded in the past week, one is forced to question is an individual free to make the choices in this country? or the freedom to choose the religion of choice and Right to live also comes with riders?

Hadiya, 24-year-old woman before converting to Islam was known as Akhila Ashokan and was a Hindu. While she was studying in a medical college along with her friends (who are Muslims) she was drawn to Islam and decided to convert. She knew her parents would not approve the conversion since her parents are staunch Hindu, so she decided to not to return home and informed her parents about it.

Obviously, hurt by what his daughter had done, Ashokan decided to approach the Kerala High Court with a habeas corpus petition but the court dismissed it after Hadiya testified that she had left the house on her accord and also converted to Islam, because she wanted to. The court dismissed the petition saying Hadiya can practice any religion of her choice.

Till now there were no serious troubles for Akhila who had changed her named to Hadiya. She went about her life doing what she wanted eventually getting married to Shafin Jahan, whom she met on a website, this is in contrast to the popular understanding of the story that, Hardiya converted to Islam in order to marry Shafin, giving the whole story angle of ‘Love Jihad’.

After almost a year Hadiya’s father returned to Kerala HC with another petition, HC took seriously Ashokan’s second petition, claiming that Hadiya was being lured away to be transported to Syria. Though Hadiya clarified that she does not even own a passport. However, the court ordered that she be housed in a women’s hostel and complete her studies. Later, the court decided to annul their marriage.

It was after this that Shafin Jahan, approached Supreme Court of India, to grant freedom and justice for his wife Hadiya. But the petition filled by Jahan came only after Kerala High Court annulled the marriage and placed Hadiya in her parents custody. Jahan’s petition in the apex court mentions that Hadiya is under house arrest by her father Ashokan.

Well, this story of Hadiya and Shafin is full of all the ingredients one would need to pen down an emotional love story for Bollywood. But the fact of the matter is this not a fictional story, this is a true story and at the core of it, the constitutional rights of an individual have been brutally murdered.

Supreme Court has ordered Hadiya to be freed from house arrest and has assigned a guardian to her, but is that also total freedom? Does Hadiya feel let down by the constitution of India and the Judiciary yet? The entire case raises a few fundamental questions such as to what extent parents can control the decisions you make, until what age can an individual be placed under parental custody and guardians?

A woman, (Hindu woman to be specific) marrying a Muslim man potentially should not possess any threat to national security, but we must not rule out any possibility and hence the National Investigation Agency should probe this matter but not allowing a woman to convert to a religion of her choice and marry the man of her choice is in direct violation of her fundamental rights.